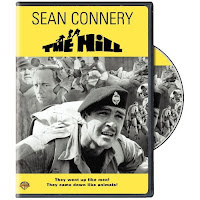 UPDATED: New Spy DVDs Out Today
Mission: Impossible - The Second TV Season comes out today for $49.99 (but available for considerably less most places--see below), and it's another excellent TV set from CBS/Paramount. Like the first season, it comes on seven discs in four clear slimpacks, all wrapped up in a shiny package with very nice artwork! This is one of the standout spy DVD releases of the year, and I'll have a full review up later today...
Additionally, Warner Bros. releases the James Garner/Eva Marie Saint WWII espionage thriller 36 Hours. I've never seen this one, but I'm really curious about it. It sounds interesting, sort of like a Prisoner episode. They also release the Sean Connery movie The Hill, directed by Sidney Lumet. This will come as welcome news for Connery fans, as the gritty black and white war/prison movie contains one of his best performances, and is long overdue on DVD. It should also interest Bond fans in general, as The Hill is the movie that Connery famously plugged instead of Thunderball at every chance he got. The fact that press only wanted to know about James Bond, and wasn't interested in his more "serious" work, was one of the major factors in his decision to leave the role for the first time after You Only Live Twice.
Posted by Tanner at 12:54 AM

All sound great, but I'm really interested in seeing "The Hill." I'm a huge Connery fan. He's still my favorite Bond. I've always enjoyed him whether he's playing 007 or whatever other role. I think he's a fine actor. From what I've heard, this was a great performance by him. It's a shame that he didn't get the recognition at times he deserved. I do love "Thunderball." That's one of my favorite Bond flicks.