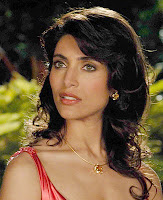 The trades are just overflowing with spy news today!
As The Crowe Spies
It should really go without saying by now that if it's a Ridley Scott film, Russell Crowe will probably be in it. But I guess it does need saying, so Variety says it today. Crowe has joined his old Quick and the Dead co-star Leonardo DiCaprio in Scott's Body of Lies (formerly known by the much better title Penetration), based on David Ignatius's novel. The trade says: "Crowe will play Ed Hoffman, the manipulative CIA boss who teams with operative Roger Ferris (DiCaprio) to trap a dangerous Al Qaeda leader by planting a false rumor that the bomber is in cahoots with the Americans." We've been hearing about this movie forever now, since long before the book was published. The Hollywood Reporter adds that shooting is finally (tentatively) scheduled for late August. Oscar-winner William Monahan wrote the script.
What Have They Done To Solange?
Variety says Casino Royale Bond Girl Caterina Murino (Solange, she of the lime green bikini on horseback) has chosen her next project. She'll co-star with Richard E. Grant and Mena Suvari in an adaptation of Ernest Hemingway's unfinished novel, The Garden of Eden. It's a Jazz Age tale about a pilot-turned-writer and his flapper wife (you know, the standard Hemingway stuff) who "bring a sultry Italian girl (Murino) into their bedroom." They could do a lot worse!
The Hickenlooper Project
Wouldn't that have been a great Ludlum title? Pity he never thought of it. Anyway, director George Hickenlooper (The Man From Elysian Fields, The Mayor of Sunset Strip), whose last movie was the Edie Sedgewick biopic Factory Girl, will next turn his attention to a spy movie. Variety reports that Morning Spy, Evening Spy, based on a novel by Colin MacKinnon, "revolves around an aging CIA officer who is assigned to the Middle East in the days preceding the 9/11 terrorist attacks." The operative becomes obsessed with the capture of Osama bin Laden. "His hunt brings him within meters of Al Qaeda operative and lead 9/11 terrorist Mohammad Atta just days before the attack."
Cuban Intrigue
New Line has optioned the book The Americano: Fighting for Freedom in Castro's Cuba, an Untold Story by Aran Shetterly. It's about William Morgan, a guy who apparently led a life of intrigue so complicated that I won't even attempt to paraphrase. Here's the direct quote from the trade: "Morgan, a high school dropout who was rumored to have been a gangster and a CIA operative, headed to Cuba in the 1950s, and rose to command the legendary Cuban fighting column known as the Tigers of the Jungle. Blond, and wielding a gold-plated pistol, he stood out among rebels. Morgan eventually became caught up among the conflicting agendas of guerrilla leader Castro, U.S. mobsters and the FBI; when he turned against Castro after the Cuban leader embraced communism, Morgan was executed in 1961."
International Audiences Won't Get Get Smart As Soon
Variety also has an interesting online story about how studios are dealing with the 2008 Summer Olympics and other distractions for the public's attention in planning their release strategies for next year. The relevant tidbit for spy fans? "Speaking to Daily Variety Wednesday at exhib confab Cinema Expo here, Warner Bros. international distribution prexy Veronika Kwan-Rubinek said, 'Get Smart is interesting because the domestic release date is June 20 and that falls right in the middle of the (European soccer championship), so we wouldn't want to go day and date on that movie.'" So, unlike most of this summer's blockbusters, which are opening on the same date in most territories around the world, Get Smart will follow the old model and likely roll out a few months later in Europe. Sorry, Europeans...
Burn Notice Reviews
Finally, both trades review Burn Notice, debuting tonight at 10PM (9 Central) on USA, commercial-free. Variety is pretty enthusiastic. Their reviewer, Brian Lowry, finds it a "pleasant surprise, if only because so little about the concept indicates how much fun the 90-minute premiere is." The Hollywood Reporter is cooler, but ultimately deems it "perfect summer viewing--fun and filled with action and bikinis." Both lavish praises on star Jeffrey Donovan.
Posted by Tanner at 11:36 AM

I'm very interested in seeing "The Garden of Eden" film that Caterina Munro is playing in. I'm a huge Hemingway fan. It tooks me years though before I read this book. While it's not his greatest, I still enjoyed it. Plus it will be nice to see Munro in another film. Yeah, the couple could do a lot worse that her. She's very beautiful. I wish she had had more scenes in "Casino Royale."

Yeah, I would have appreciated a bit more of her too. They wasted a previously unused Fleming Bond Girl name by calling her Solange (from "007 In New York") and then never even mentioning it onscreen!