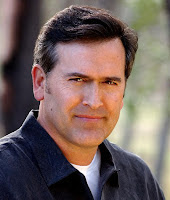 New Bruce Campbell Spy Series
I can’t believe that I hadn’t heard of this until last week when I read about it on my friend Rebecca’s blog! Cult film legend and star of The Adventures of Brisco County, Jr. (one of my favorite TV series ever), Bruce Campbell, will appear as a series regular in a new spy show on USA. And it debuts this month! Unfortunately, Bruce isn’t the lead. (Is he officially too old to be a series lead now? If so, that’s depressing.) The lead is Jeffrey Donovan, star of the short-lived Touching Evil.
Donovan plays Michael Weston, a CIA agent who’s suddenly abandoned by his agency in the middle of a mission, given a “burn notice” which leaves him out in the cold. The series tagline is, “When spies get fired, they don’t get a letter from Human Resources.” Apparently what they get instead is a “burn notice” flagging them to all intelligence operatives as unreliable and making them “untouchable,” according to the network’s official blurb. The description goes on: “Having no idea what or who triggered his demise, Michael returns to his hometown, Miami, determined to find out the reason for his sudden termination. Unable to utilize his normal contacts and needing to stay under the spy network radar, he puts his Special Ops training to use to help those who the police can't or won't, in order to fund his ongoing personal investigation.” So it sounds kind of like Alias meets The Equalizer. Campbell plays his sidekick, Sam, the only man he can trust. Apparently Sam is a wealthy Miami playboy who helps Michael with cashflow as a means of escaping the boredom of the high life. The series also stars Gabrielle Anwar and Sharon Gless (The State Within).
IESB scored a good interview with Campbell when he was promoting the show at the NBC Summer Press Day. In it, he sums up the series with typical self-deprecating wit: “Every episode we’re going to be doing something ridiculous, some sting operation, some covert something where things go wrong and, you know, things blow up in your face and get ugly and we have to lie, cheat and steal. It’s perfect.” Personally, I’m definitely up for watching Bruce Campbell “doing something ridiculous” every week, but it sounds like there will be a bit more to it than that. The idea of stings and cons recalls Mission: Impossible, which is promising.
Burn Notice, from executive producer Matt Nix, debuts on Thursday, June 28 at 10 PM on the USA Network. It’s produced by 20th Century Fox Television. Let’s hope it fares better than Campbell’s last spy series, Jack of All Trades, which was cancelled after two half seasons.
Posted by Tanner at 12:56 PM

Wow thanks for the heads up sounds just up my alley. Since its the USA Netwrok they will let it grow hopefully if it gets any kind of audience. But sadly I'll be on the torrent hunt for it. Since I don't have cable.

I'll definitely have to check this one out. I'm a huge Bruce Campbell fan. I've loved so much of his work, including the "Evil Dead" movies, "The Adventures of Brisco County Jr," his appearances on "Xena" and "Hercules," "Bubba Ho-Tep," etc. His cameo as the French maitre d' in "Spider-Man 3" was awesome. Even if he's not the lead, this is one show I'll have to watch. Hopefully USA will leave it on long enough to develop a fan base