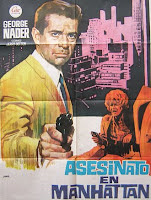 Following the success of France's OSS 117 revival, another classic Eurospy hero is getting reactivated. "G-Man Jerry Cotton," who appeared in a string of German Bond knock-offs in the Sixties, will return to German screens next year. Variety is unclear on the matter, but it seems likely that, like 0ss 117: Cairo Nest of Spies, this will be a parody revival and not a serious franchise reboot. Rat Pack Filmproduktion is producing, and they gave a similar treatment to Edgar Wallace Krimi mysteries last year in The Wixxer. Wixxer was shot in black and white, and--I believe--set in the Fifties or early Sixties. But it was a send-up of the endless German Krimi movies (basically their version of the Italian giallo) based on Wallace's pulp novels made from the late Fifties to the mid-Seventies, and mostly starring Joachim Fuchberger. Presumably the new Jerry Cotton movie will follow the same pattern, although apparently serious Jerry Cotton adventures are still published in Germany, so perhaps not.

The original Jerry Cotton cycle began as a Krimi series itself, and then morphed into a spy series as the Bond movies took off. American beefcake actor George Nader (banished to Europe when a tabloid threatened to out him in America) starred as Cotton. I haven't seen any of them yet, though I did find Nader rather off-putting as a secret agent in the atrocious Million Eyes of Sumuru. DVD collections are available in Germany, but without English subtitles.
Posted by Tanner at 12:13 PM

Thanks for the information! That's great to hear! I didn't know they were available anywhere in English. Is there a Dutch Amazon, or equivalent online store that you know of? I guess I have a new quest...

I do not really know any Dutch online store I can recommend. I bought mine either from Dutch (www.ebay.nl) or German (www.ebay.de) eBay. The content of the boxes are:

DEATH IN A RED JAGUAR is in German Only. The 7 other DVDs have separate German and English Language Versions on the same DVD. Title sequences and other misc. scenes have subtle differences in these versions. Theses sets are limited to 1000, supposedly.