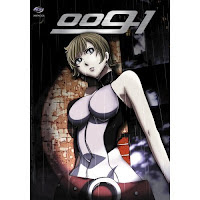 On DVD Today: 009-1
The apparently Ian Fleming-inspired anime series about a futuristic female cyborg agent, 009-1, Vol. 1 is in stores today... Since I've never seen the show, I'm going to quote the intriguing product description for Vol. 2 from Amazon: "In a world where the Cold War never ended, East and West continue to battle for technological and political supremacy. Mylene Hoffman, field commander of the elite Double Zero intelligence division, exists in this world with her eyes open and her body always ready to do battle. There’s no problem Mylene can’t solve that doesn’t use the proper application of high explosives, fast-talk, deceptive jewelry, make-up and the right moves behind closed doors!" Definitely sounds worth checking out!
Danger Mouse Megaset
Another animated spy show is due for the complete series treatment from A&E this August. TVShowsOnDVD reports that the classic British kids' show about an eyepatched agent who happens to be a mouse will be released as a megaset (containing all ten seasons, which were previously released individually) on August 28. Billed as "the world's smallest secret agent," Danger Mouse promises to "send up everyone from 007 to Sherlock Holmes," according to A&E's press release. Let's hope it's as good as the last "Danger" megaset the company put out...
The Unit
Fox will release the second season of The Unit on September 25. The series, produced by David Mamet and The Shield's Shawn Ryan and starring 24's Dennis Haysbert, follows the exploits of a US military covert ops team. TVShowsOnDVD reports that unlike the rather bare-bones first season, Season Two will be loaded with featurettes and commentaries.
Hurricane Gold Final Cover
The Young Bond Dossier revealed the slightly different final cover art for Charlie Higson's next Young Bond adventure, Hurricane Gold, last week. It's now up on Amazon.co.uk.
New James Bond Encyclopedia
The next officially-licensed, large format book on Bond films (following The James Bond Legacy, Bond Girls Are Forever and last fall's Art of James Bond) will be The James Bond Encyclopedia by John Cork and Collin Stutz. All of these books have been beautifully produced, but they seem to be coming a bit quick now... My bookshelf's starting to sag, and I still have yet to crack open The Art of James Bond, which got buried at the bottom of a pile of new Bond books that came out around the time of Casino Royale! I never though I'd complain about too much James Bond product, but I'm starting to look back fondly my childhood days when the only readily available books on 007 were Stephen Jay Rubin's The James Bond Films and Raymond Benson's The James Bond Bedside Companion! I kind of wonder what this new book will have to add since Rubin's Complete James Bond Movie Encyclopedia is pretty thorough (if occacionally erronious) and even covers Never Say Never Again and the '67 Royale, which this one may not, since it's licensed by EON. There can't be that many new photographs left unseen in the archives at this point, can there? Still, Cork always does a great job with any Bond project he contributes to, be it book, Special Edition DVD or the now defunct, sorely missed Goldeneye Magazine.
Fuller Report Soundtrack Ready To Order 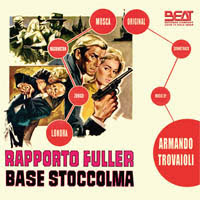 Following last month's teriffic release of the Special Mission Lady Chaplin soundtrack, another classic Eurospy score has been unearthed! Screen Archives is now taking preorders for Rapporto Fuller Base Stoccolma (The Fuller Report) for $17.99. The score, by Armando Trovaioli, is coming out on Beat Records. The 1967 movie, starring Ken Clark, is currently being restored by Dorado Films for a DVD release in the (hopefully) near future.
Actor News: Ian Ogilvy Records New Commentary
DVDDrive-In reports that Return of the Saint star Ian Ogilvy will participate the in the commentary track on MGM's long-awaited Region 1 DVD of Witchfinder General, starring Vincent Price. The classic horror film will be presented as a Director's Cut, and be loaded with special features including the commentary with Ogilvy and producer Philip Waddilove. Anyone who's heard Ogilvy's commentaries on Umbrella's Australian Return of the Saint DVDs knows that he's a very entertaining commentator, so this should be a treat. The disc comes out September 11 and marks the welcome return of MGM's long dormant Midnight Movies line.
Posted by Tanner at 9:40 PM