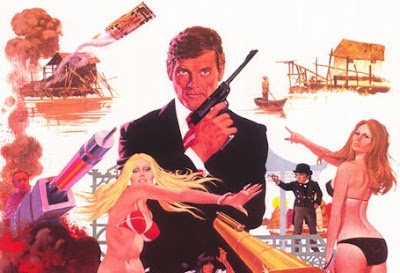 The New Beverly Cinema in Los Angeles is showing a double feature of rarely screened Bond movies this weekend, On Her Majesty's Secret Service and The Man With the Golden Gun. $7 gets you into both movies, at 7:30 and 10:10 respectively, this Sunday, Monday and Tuesday, June 24-26. OHMSS is my personal favorite (and readers' favorite, judging from the recent contest poll), and it's always even better on the big screen. Which used to be a pretty unusual occurrence, but seems (happily) to be becoming more frequent these days, with recent play dates in L.A. and New York. I'd love to see it become a yearly tradition, so I hope this screening does well. Any Roger Moore Bond film, on the other hand, is still pretty rare. For some reason whenever revival houses show 007, they figure people want to see Sean Connery. And of course they do, but this Bond fan also wants to see Moore and Dalton! So even if TMWTGG is one of Sir Roger's weaker entries (despite the awesome presence of Christopher Lee), it's also well worth attending.
Posted by Tanner at 4:13 PM

I would kill to see Live And Let Die on the big screen, instead of the first Bond movie I saw in a theater......moonraker.

I was lucky enough to see LALD on the big screen when the showed it at the Director's Guild in LA a few years ago. Tom Mankiewicz, Gloria Hendry and the late Julias Harris spoke afterwards on a panel moderated by then-NY Times film critic Elvis Mitchell. I usually like Mitchell, but he was AWFUL that night. He clearly hated the movie and hated Moore, and kept piling praise on the actors who were present (it was some sort of tribute to black Hollywood in the Seventies, and to Harris in particular) while hurling jabs at Roger. The actors all became pretty annoyed by this, and all lept to Moore's defense, particularly Hendry who said that he actually taught her a lot about acting. It was pretty awkwards. Mankiewicz was entertaining, though, and Hendry's always a riot if you ever have a chance to speak with her at a convention or anything.