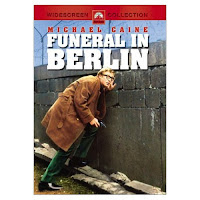 Funeral In Berlin DVD Back In Print

This may be old news for most readers, but it had slipped by me, so perhaps it slipped by others who are interested as well. Paramount's Region 1 Funeral In Berlin DVD, which had been out of print for a number of years and commanding high prices on Ebay (I know; I sold an extra copy there myself!) has quietly crept back into print some time in the last year. I'm not sure when, because Amazon still lists the original 2001 release date, but it's currently in stock at both Amazon (for $26.99) and DeepDiscount, where you could use that coupon and take it home for just over eleven bucks! (And I still see this priced at sixty in some used disc shops.) For the uninitiated, Funeral In Berlin is the second in the superb trilogy of Harry Palmer spy movies from the 1960s starring Michael Caine. Based on Len Deighton's books (wherein the hero went unnamed) and produced by Harry Saltzman as the antithesis to his other spy franchise hero, all three Palmer movies are absolute essentials for connoisseurs of the genre. The original, The Ipcress File, remains out of print in the United States and fetches upwards of $70. The last (that's right, I'm not counting the lacklustre '90s revivals), Billion Dollar Brain, finally became available a few years ago, albeit slightly edited; it's missing a brief snippet containing Beatles music due to famously exorbitant licensing fees. Still well worth it though!
Posted by Tanner at 7:47 PM

Love the Deighton books well worth the reads. But the bnest of the films is still The ipcress File.

I love the books AND the films, each of them for their own merits. Billion Dollar Brain is a very different film from the others (more of a Bond film? more of a Ken Russell film?) but absolutely fantastic for what it is. On a given day, either that one or The Ipcress File is my favorite of the movies. I loved the book Horse Under Water, and I'm really sorry the movie never came to be. It was due to follow Billion Dollar Brain, and to star Michael Caine's Play Dirty co-star Nigel Davenport.