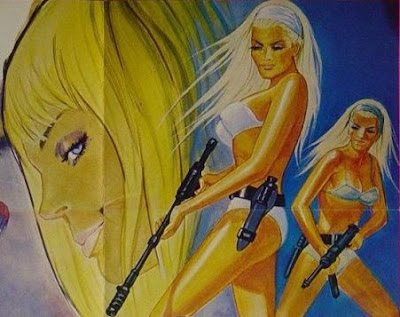 As part of "Mods and Rockers," their awesome annual festival of Sixties movies, the Egyptian Theatre in Hollywood, CA will screen the greatest Bond knock-off of all time, Deadlier Than the Male on Thursday, July 26. It will be a double bill with the ultra-rare 1966 Eurospy flick Lightning Bolt. Deadlier Than the Male (1966) stars the luscious Elke Sommer and Sylva Koscina as a pair of bikini-clad assassins and Richard Johnson as a Sixtified (or Bondified) Bulldog Drummond. Nigel Green (of Ipcress File fame) plays the villain. Lightning Bolt (like Thunderball... get it?) stars Anthony Iseley and is directed by Antonio Margheriti. I've never seen it, so I can't comment on it, but I'm eagerly looking forward to the opportunity!
Posted by Tanner at 1:10 PM

I would love to be there. I'm a huge fan of "Deadlier Than The Male." I adore the sexy Elke Sommer. She is one of my fav gorgeous ladies of the Sixties era. I loved her in this movie, as well as the Matt Helm spy spoof "The Wrecking Crew." I've never seen "Lightning Bolt" though. It sounds like a great double feature.

I love Elke too, as you can probably tell from reading this blog! Deadlier Than the Male is my absolute FAVORITE non-Bond Sixties spy movie, and I can't WAIT to see it in 35mm! I hope they manage to persuade Elke to come speak afterwards. She spoke at the same theater a few years ago after a screening of The Oscar (not NEARLY as good a movie as DTM... in fact pretty lousy) and was gracious enough to sign a Deadlier Than the Male poster for me.