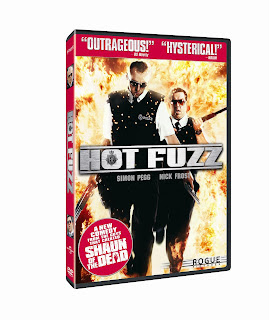 Universal has announced a July 31 release date for Hot Fuzz, this spring's action movie spoof from the creators of Shaun of the Dead which co-starred Timothy Dalton. A mustachioed Dalton has a great time making the audience believe he's a villain, whether he is or isn't in actuality. Simon Pegg and Nick Frost lead a truly fantastic cast including Jim Broadbent, Steve Coogan, Martin Freeman and Callan himself, Edward Woodward. Special features are a little bit different from the Region 2 disc, and they sound great. There's a commentary with director Edgar Wright and Simon Pegg, twenty minutes of deleted scenes (hopefully with more Dalton!), a documentary on the stars' U.S. promotional tour and, strangest of all, a feature called "The Man Who Would Be Fuzz." Let's go to the press release for details on that one: "Simon Pegg and Nick Frost hit their marks as Sean Connery and Michael Caine playing out a scene from the movie." Wow! Odd, but... I can't wait to see it!
Posted by Tanner at 10:47 PM

I checked out the UK Hot Fuzz last weekend. Didn't watch all the features, but there's a scene wher Dalton blows his line, and then launches into a torrent of swearing...only to have the director say 'that'll be on the DVD.

On the Shaun Of The Dead DVD, Pegg and Frost also do a Peachy & Danny (Connery & Caine) impersonation in the Special Features. It looks like it is set to become a running gag.

That Dalton bit sounds funny. I look forward to seeing it! I have the Region 2 Shaun of the Dead DVD, but I guess I never explored it fully, because I don't remember that Man Who Would Be King routine!