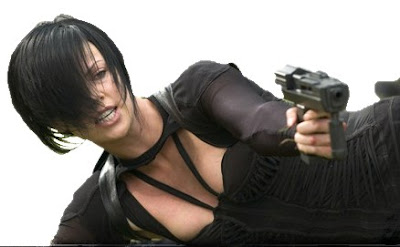 Variety reports that Charlize Theron has joined the cast of one of the two spy movies in development with the title The Tourist. It's the Tom Cruise one, not the George Clooney one. The trade says, "In the Julian Fellowes-scripted drama, Theron will play a female Interpol agent who uses an American tourist in an attempt to flush out an elusive criminal with whom she once had an affair." Cruise favorite Christopher McQuarrie is currently doing a polish on the script.
Posted by Tanner at 2:46 PM

I recently came accross your blog and have been reading along. I thought I would leave my first comment. I dont know what to say except that I have enjoyed reading. Nice blog. I will keep visiting this blog very often.

Thank you, Barbara. Please do keep reading! Glad you like it.