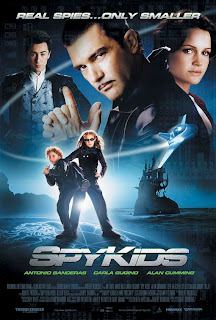 While out doing press for Predators, which he produced, Robert Rodriguez has told various outlets (including Movieweb) that he plans to make his next film Spy Kids 4: Armageddon.  He went into more detail on the project in an interview with Ain't It Cool, revealing that the new film would be a reboot.  "It would be 10 years [since the first Spy Kids movie] when this next one comes out," the director told the website. "Getting to reboot your own series is pretty interesting. It’s pretty fun and it doesn’t feel like we are going back to the well again, and the idea is doing it again with new kids and making this one… The first three are the Roger Moore Bond movies; this is the Casino Royale. That’s kind of where are going with it. It’s good." I like the analogy, but I can't quite picture the Spy Kids films going that dark!  It would be interesting though.  Perhaps a bit more like Alex Rider?  While the new movie will star new kids, Rodriguez goes on to reveal that original Spy Kid Alexa Vega, now nearly 22, will return in a mentor capacity.  "She’s now an older spy," he says, "who wants to revitalize the Spy Kids division, which got shot down seven years ago for budget reasons."
Posted by Tanner at 11:41 AM