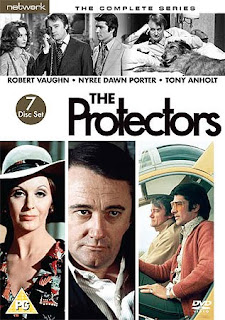 Speaking of Robert Vaughn, his other spy-ish series is headed back to DVD. Network has announced The Protectors: The Complete Series for release in the UK on August 9. I really enjoy The Protectors (particularly the second season, which is far superior to the first one), but I'd be hard-pressed to actually describe the premise.  So I'll let Network handle that one:


Each of the world’s major cities has its best detective agency, and each of these has its best agents; super-agents like The Protectors. The most sensitive, baffling, dangerous assignments are handled by this trio of adventurers with no equal among private eyes. In their nerve-tingling assignments, they function as a highly trained team, but they know that the next mission might mean death – and they live as if each moment were their last. Robert Vaughn stars as Harry Rule, the suave American who leads their operations and works from a London office; Nyree Dawn Porter is the elegant, Rome-based Contessa di Contini, and Tony Anholt is Paul Buchet, a French agent operating out of a Paris apartment.

Okay, so that's the set-up?  Hm, I'm not sure the series itself, which aired from 1972-1974, ever made it totally clear.  (In fact, I always thought they all worked for Harry Rule's detective agency, not separate ones.) But that doesn't matter, because what it really amounts to (like just about any ITC series) is cool people (well, a cool boss, anyway, and a fairly attractive woman and a pretty useless "third guy" who's basically just a clothes horse for wonderfully horrible Seventies fashions–you know, par for the course!) travelling to exotic locations solving crimes and spying and fighting drug dealers and fencing frogmen and whatnot.  The very impressive actual location filming gives it the edge over many of ITC's more studio-bound series, and the music and theme song are incredible.  It's kind of tough to jam a wholly satisfying adventure plot into just a half an hour (or at least it was by this point; for some reason that art was lost after the original Danger Man series did it so well–and has yet to be rediscovered), but those stylistic elements overcome that minor fault.  The Protectors is very much style over substance, and that's fine by me.  Unlike most other live-action ITC adventure series, this one comes from the puppet-addled mind of the great Gerry Anderson, for once dabbling outside the realm of science fiction.  (And there are no puppets on The Protectors!)

Since they've offered the superb soundtrack to the series (arguably its best feature, and possibly the best of all the ITC soundtracks yet available) for a year now I was actually surprised to realize that Network hadn't already issued The Protectors on DVD!  But they hadn't.  It was previously issued in the format (with a much less cool cover) by ITV Studios back in 2002, but has been long out of print in Britain.  In America, it's still available from A&E in two volumes (much, much cheaper used on Amazon than new!), and the first season is also included in their wonderful ITC sampler, The Spy Collection Megaset (also cheaper used).  Network's new release–sporting a cover stylish enough to befit this stylish show–is a 7-disc set containing all 52 half-hour episodes. Bonus materials are limited to PDF material (original brochure and press information) and a very extensive stills gallery. It will be available on August 9 and retail for £59.99, but can currently be pre-ordered through Network's website for just £38.99.
Posted by Tanner at 3:37 PM

Actually, good old Lew Grade himself gave Gerry Anderson the brief for the show, as well as telling him who the two lead stars were going to be.

The skinny can be found here...

And don't be dissing Tony Anholt (yo.) He did a great job working off Vaughn and kept from being just a 3rd banana.

As for the clothes, just wait another ten years when the kids start pointing at what we're wearing now and going "OMG, didn't they KNOW?"

Tex
(who saw The Protectors when it first aired here)

I'm glad the extras are paltry so I can get the A&E versions on Amazon for a cheaper price.

I agree in general with your comments. And I certainly agree that John Cameron's score was the best thing about it - thank god they issued the soundtrack :-)

One correction. You link to Network's site to 'pre-order'; it ISN'T available for pre-order on the Network site. They make it 'orderable' on the day it is due.