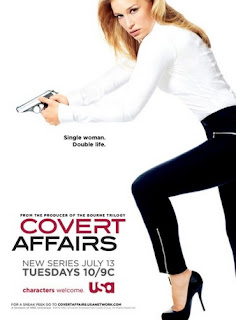 Don't forget to tune in tonight to the debut of USA's new spy program that we've been hearing about for over a year now: Covert Affairs, starring Piper Perabo, Christopher Gorham, Peter Gallagher and Kari Matchett (who made quite an impression on me in her recurring appearances on 24 and Leverage). There are plenty of reasons to sample the show.  Reviews are all pretty favorable, including both Variety and The Hollywood Reporter, who calls it "perfect summer television."  It's produced by Doug Liman, whose spy resume is both impressive and eclectic, including The Bourne Identity, Mr. & Mrs. Smith and the upcoming Fair Game.  USA has a pretty good track record with spy shows, too, and its Burn Notice is probably the best one on right now. It sounds awfully similar to Alias, but then I miss Alias and I'd welcome something to fill that void!  And, damn it, I like that poster that's all over LA's busstops, even if it does seem overly reminiscent of some (specific) chick-lit/spy hybrid whose title I can't recall, and even if there are zippers on her pants (which I guess is a fashion thing now).  I'm excited about Covert Affairs!

Covert Affairs airs Tuesdays at 10:00 EST on USA, starting tonight.  The pilot runs an hour and fifteen minutes, so be mindful of that when setting your DVRs.
Posted by Tanner at 5:03 PM

Email ThisBlogThis!Share to TwitterShare to FacebookShare to Pinterest
Labels: TV