The excellent art blog Golden Age Comic Book Stories has some Nick Fury artwork by the great Jim Steranko that I'd never seen before!  In a post about art from convention programs of the Sixties and Seventies, there are two short comic strip stories from 1968 featuring Marvel's eyepatched superspy written by Phil Seuling and drawn by Steranko.  Having appeared in convention programs and not in Marvel books, these are not included in any of Marvel's collections of Steranko Nick Fury stories.  (There may be other reasons why they're not included, too.)  The first one (below) features a frank conversation about the social mores that governed comic book content at the time–and a rather simian Nick Fury ogling a mini-skirted woman amidst Times Square topless joints.  The second, a two-pager, features another conversation between Nick and his trench-coated friend, a particularly dynamic Steranko action pose and a whole bunch of characters owned by other companies that pretty much ensure this art will never appear in any Marvel collection.  Go to Golden Age Comic Book Stories now to view it!  (Just scroll down.) 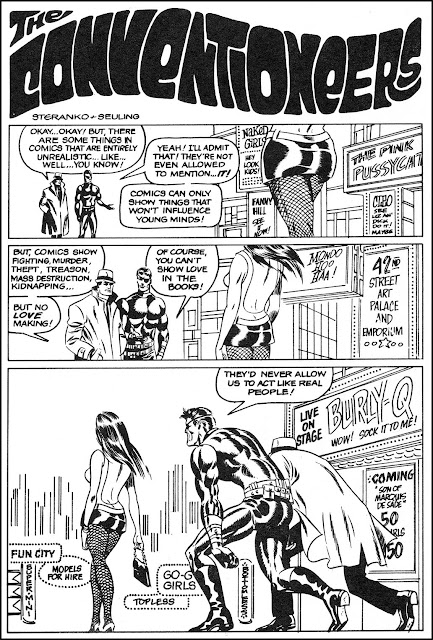