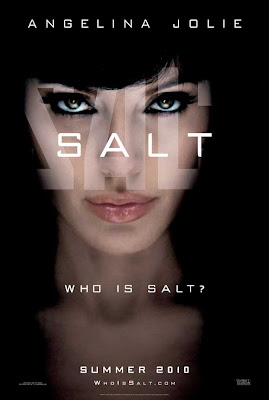 Salt is kind of an odd movie. For its first half, it’s exactly what I expected: a thrilling (if utterly preposterous) spy movie combining the barest bones of a le Carré-esque espionage plot (which is quickly abandoned) about defectors and sleeper agents with breakneck action sequences that come as fast as those in the Bourne movies, but with a refreshing pre-Greengrass 90s sensibility. What I mean by that is not aimed as a slight against Greengrass, who is a master of the quick-cut, shaky camera sensibility he pioneered, but merely a frustration with his many imitators. Greengrass’s influence has been so pervasive that that style has become de rigeur for the genre today–and in less capable hands it often doesn’t work. In Salt, Phillip Noyce (an accomplished veteran of 90s spy movies like Patriot Games and Clear and Present Danger* who then fled Hollywood to spend the last decade directing artier independent fare, including the terrific spy film The Quiet American) very competently builds action sequences that you can easily follow and allows them to play out in full view. There is very little room for CGI trickery here, and the practical effects and physical stunts are highly impressive. Noyce’s action style reminds me of that of Bond veteran John Glen (perhaps the most underrated action director of all time) in that its genius is the appearance of no style. By that, of course, I don’t mean that it’s actually without style; I mean that the art of the style is to remain unobtrusive. You will enjoy the action for the stunts themselves, and not get distracted by flashy direction. I love this, and found the old-school approach (which nicely compliments Kurt Wimmer's equally old-school spy script) quite refreshing. In its second half, however, Salt veers a tad off the rails.

What begins as a Bourne-ish spy story (and now I’m using Bourne as a story comparison rather than a style one; there’s no denying the Bourne influence in that respect!) goes places you might never imagine from the trailers and becomes a conspiracy thriller involving the President of the United States, the President of Russia, control of America’s nuclear arsenal, multiple assassinations and the fate of the world. Clearly I’m not against such a story, but I was enjoying the first story better and didn’t really appreciate the radical shift in the second half. The conspiracy half (which features one of the least convincing–and dopiest–actors to ever play an American president) strays from Bourne territory into more 24 territory. Personally, I preferred the first half. But my girlfriend felt just the opposite, and thought that the movie really came alive when it went so over the top in the second, so perhaps you’ll find that more your cup of tea as well. I suppose the glass-half-full way to look at it is that there’s something for everyone! 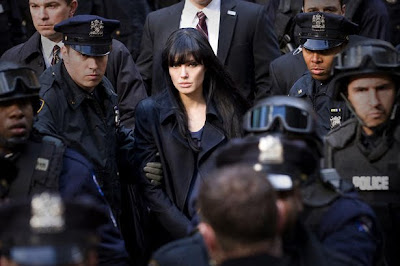 The movie (surprisingly short for a modern spy film) also ends rather abruptly. I recognize that this ending (extremely Bourne-like, by the way) is a set-up for a sequel and I will happily line up for that sequel, especially if the same creative team is involved. But in this movie, I felt a bit ripped off, like someone had turned off the TV before it was over. I wanted to yell, “Hey! I wasn’t done watching that yet!”

What’s odd is that now it seems like I’m giving this film a negative review–and I’m not. I really did very much enjoy the first half–and I did enjoy the movie as a whole, as well, even if I had misgivings about the second half. It’s also impossible to deny that it’s a better movie than Knight and Day, for which I wrote a very positive review, so I suppose that comparison exposes the extreme subjectivity in film reviewing, and the large role that expectations play. (I felt defensive of Knight and Day, a far-from-perfect but highly enjoyable movie that seemed to be under attack on all sides; Salt, on the other hand, seems to be garnering rather favorable notices already, making it seem safer to voice my minor gripes.) Anyway, the action is amazing, and Angelina Jolie is at the top of her game. She is sexy, and that certainly adds to any movie star performance, but the role doesn’t rely on that fact. (In fact, she spends a good chunk of the film in decidedly un-sexy drag, sporting a very unfortunate kd lang haircut!) She’s also an extremely physical actress, and the role does rely on that. Overall, it doesn’t really show that the part was originally written for a man (Tom Cruise flirted with the project for a long time), but that fact may have served to create a tougher female role than we usually see, even today. Tough without relying on sexiness, I mean. (Salt is never pictured in her bra, I don't think... though she does discard her underpants–off camera–in the middle of a rather tense standoff!) There are plenty of strong female roles in the spy genre, but most of them thrive on combining capability with sexuality. (Think Sydney Bristow.) In Salt we get a female agent who doesn’t rely on that crutch in her actions. As when Honor Blackman stepped into a part originally written for a man and in the process forever changed female portrayals on genre TV, I think that might be attributable to the character’s sex change on the page.

We’re never fully aware of Evelyn Salt’s true motivations (Who Is Salt? indeed!), but that doesn’t alienate us from the character–largely thanks to Jolie’s compelling performance. Pretty much off the bat her character’s world is thrown into chaos when a walk-in defector accuses her of being a Russian sleeper agent, and we’re plunged into that chaos along with her. Her performance and Noyce’s slick direction (along with Wimmer's equally slick dialogue) were strong enough that I didn’t really stop to ponder the utter preposterousness of the spy plot until after the movie was over. If she is really a sleeper agent, though, then how on earth would it benefit the Russians to expose such a successful mole right before they really needed her? It makes no sense whatsoever, but such questions of logic are easy to ignore amidst a fast-moving action plot. (Once you do start asking those questions, however, you might also ask yourself exactly why “the world’s foremost arachnologist” has unprecedented access to the North Korean border. Is the North Korean border just crawling with exotic spiders?) Instead of wasting time contemplating the logic of it all (or occasional lack thereof), we’re breathlessly following Jolie’s daring escape from a CIA tactical team. Along the way she improvises with tactics equal to Jason Bourne’s, mountaineers along precarious ledges, leaps from moving truck to moving truck, and–when the situation dictates–ruthlessly mows down whole cadres of enemy agents. Salt is a truly exciting movie with refreshingly old-school action, and for that it deserves to be a hit. I just can’t escape the feeling that it could have been a little bit more. Oh well. We have the inevitable sequel to look forward to for that! (And I will be looking forward.)

*To protect his dignity, we’ll say nothing of The Saint.
Posted by Tanner at 7:14 PM

I think Noyce has finally redeemed himself for The Saint with this film.