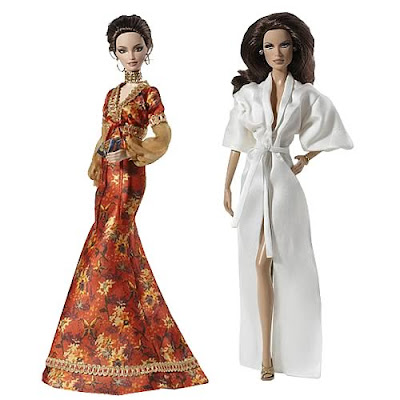 Mattel had all of its Bond Girl Barbies on display at last week's Comic-Con International in San Diego, both the previously announced (and currently available) Jinx, Honey Rider and Pussy Galore who comprise Wave 1, and the forthcoming Wave 2.  Wave 2 of Mattel's James Bond series includes Barbie dolls based on Jane Seymour as Solitaire in Live and Let Die (in the high priestess dress, of course) and Maud Adams as the title character in Octopussy, apparently clad only in that white bathrobe.  Wave 2 cases include three dolls–one Solitaire and two Octopussies.  (So grab those Solitaires when you see them!) The dolls in Wave 1 are currently available through multiple outlets (very reasonably priced, too–at least compared to that expensive FAO Schwartz exclusive James Bond Barbie set from 2002–at just $34.95 a pop); Wave 2 is due out in August.  Cases are currently available for pre-order from Entertainment Earth.

Photos of the dolls in Wave 1 can be seen here.
Posted by Tanner at 6:21 PM