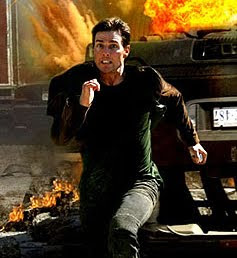 Today's Hollywood Reporter contains a story that's been picked up by various wire services and duly blown way out of proportion, considering it's nothing but speculation.  Despite the misleading title "Cruise a lock for M:I-4," the Reporter's Kim Masters suggests precisely the opposite, reiterating the notion first floated a few weeks ago that "the studio also is monitoring the overseas performance of Cruise's latest film, Knight and Day, to see whether the star retains his longtime hold over foreign audiences. If that film should gross less than $200 million overseas, some industry observers think Paramount will consider recasting the Ethan Hunt role."  Never minding the fact that all the sources in the story are "some industry observers" or "a former studio chief" or "one executive not associated with the project," that last statement is frankly inane.  Is Paramount really considering recasting the Ethan Hunt role???  I sure hope not.  I really hope that that is merely Masters' own interpretation of a general notion of switching stars.

To recast the Ethan Hunt part would be just plain dumb.  The beauty of the Mission: Impossible franchise as it currently stands is that it's not dependent on any one character!  The first feature film demonstrated that quite jarringly when it unceremoniously turned the closest thing the television franchise had ever had to a main character, Jim Phelps, into a traitor–and then killed him off.  Cruise's character, Ethan Hunt, had slummed in the lead role for the three blockbuster films so far, but the franchise is in no way dependent on him.  All it's really ever boiled down to in its film incarnation is a recognizable title, an even more recognizable theme tune, and the catchphrase, "Your mission, should you choose to accept it..."  Keep those things intact, and you can put whoever you want in the lead role!  And if you must perpetuate an existing character, then don't make it that flash-in-the-pan Ethan Hunt; do one of those "reboots" that are so fashionable these days and just make it a young Jim Phelps who never turned traitor!  (You could even work in Dan Briggs as a mentor figure, ala M:I producer J.J. Abrams' take on Christopher Pike in his Star Trek movie.)

The former studio chief who's quoted has the right idea: "Mission: Impossible is a brand," he says. "It didn't have anything to do with Tom Cruise in the beginning."  Correct!  That person gets it!  Masters, however, seems to misinterpret what's being said, immediately going back to the idea of recasting the character of Ethan Hunt and citing James Bond as precedent.  The difference, of course, is that in the case of 007, the character is the franchise.  Not so with Mission: Impossible.

According to Masters, the same executive "suggested that Paramount might not face any downside in recasting the role in M:I-4, at least not domestically." Forgetting that "recasting the role" part and assuming the source actually meant bringing in a new actor as a new lead character, that's probably true.  It's my belief that the appeal of the M:I franchise (at least now, with Cruise's star somewhat fading) has more to do with the brand and those key identifiable elements I already mentioned than with the star.  That said, I would like to see them at least give the Hunt character some sort of closure, since we have spent three films with him.  Personally, I think they should go with Cruise one more time, but bring in a younger protege who can take over the franchise in future films, as was previously mooted.

But much more than I care about seeing Cruise in the picture, I want to see Leonard Nimoy in it!  Or Martin Landau.  I'm still gutted that the great Peter Graves didn't live long enough for a redemptive cameo in the next film, as Abrams had suggested might happen last fall, but one of the other original cast members could still put in an appearance to smooth over that horrible bit of continuity, explaining that the Phelps who betrayed Tom Cruise was not the original Jim Phelps they worked with, but merely another agent who had adopted his name.

The good news, anyway, is that the studio seems adamant about making another Mission: Impossible, no matter who stars.
Posted by Tanner at 11:48 PM