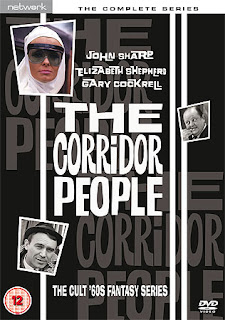 The biggest DVD release this week is once again across the pond, where Network unleashes the truly bizarre surreal Sixties spy series The Corridor People.  No, I had never heard of it either prior to Network's announcement about this release a couple of months ago!  I can now assure you, though, that this one is definitely worth picking up for Sixties culture buffs.  It's very, very weird—and not just in the ways you expect a typical Sixties spy series to be weird.  This is very intelligent, challenging television, wrapped up in the tropes of an espionage show.  Fans of The Prisoner are likely to appreciate it.  Read my full review below (and check out a clip) to get a better sense of whether or not this weirdness is for you. The Corridor People: The Complete Series is a PAL Region 2 DVD  containing all four black-and-white episodes.  That's right: only four of them.  (Clearly, the viewing public was not ready for this level of weirdness, even in 1966!)  It's available as a Network exclusive directly from the company's website.  Retail is £12.99, but right now it can be had for just £10.99. 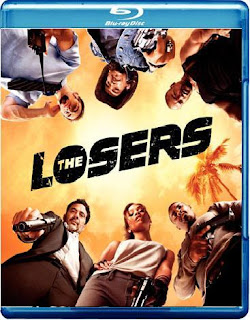 Here in the USA, we get The Losers from Warner, on both DVD and Blu-ray.  I thought the trailers for this story of burnt covert operatives taking revenge on the CIA agent who betrayed them looked like a lot of fun, but I missed it in theaters, so I can't really say too much about it.  (Yet, anyway.  I'll definitely be checking it out now!)  It's based on a DC comic book, but I'm not really familiar with the particular incarnation of that title that the movie is drawn from.  The Losers stars Watchmen's Jeffrey Dean Morgan, Star Trek's Zoe Saldana and future Captain America Chris Evans.  The DVD retails for $28.98, the Blu-ray (which also includes a standard def DVD and a stupid digital copy) for $35.99, but both can be found for nearly half as much on Amazon right now.  As usual with Warner titles, the meat of the special features is reserved for the Blu-ray.  DVD buyers get a featurette called "Zoe and the Losers;" Blu-ray buyers get that, two more featurettes ("Band of Buddies: OPS Training" and "The Losers: Action-Style Storytelling") and deleted scenes. 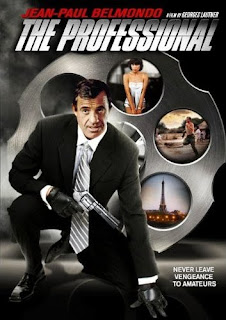 There's also a new version, courtesy of Lionsgate, of the 1981 Jean-Paul Belmondo spy/revenge classic The Professional, in which Belmondo is deployed by the French Secret Service to assassinate an African dictator only to be sacrificed by his masters when the dictator is deemed more useful alive.  This was previously available in the United States on a long out-of-print and poor quality DVD from Image.  I haven't seen Lionsgate's version yet so I can't comment on its transfer, but it is at least widescreen (1.66:1).  The only extra is a trailer.
Posted by Tanner at 6:05 PM

The Corridor People is certainly seriously weird but I loved it. I'm tempted to upgrade to this new DVD since my existing copy is pretty dodgy.