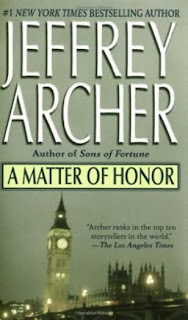 In 2010, production company New Franchise was set up with the express purpose of developing the novels of U.K. thriller writer (and disgraced politician) Jeffrey Archer for the screen. It was a model that had worked well for the Robert Ludlum estate, for whom Captivate Entertainment serves the same purpose. Last year, The Hollywood Reporter reported that New Franchise had lined up Bourne and Indiana Jones producer Frank Marshall to produce their inaugural project, a film version of Archer's 1986 spy novel A Matter of Honor. The Cold War thriller follows a former soldier named Adam Scott who opens a letter from his deceased father, the contents of which set off a chain of events that lead to Scott finding himself chased across Europe by the KGB, CIA and MI6. Today, Deadline reports further movement on that project. Blacklist screenwriter (that's a good thing nowadays; not like in the Fifties) Richard Regen has been hired to adapt the novel. New Franchise and Marshall hope to launch a Bourne-like franchise centered around the Scott character. The plan as outlined by The Hollywood Reporter last fall called for using Archer's novel Honor Among Thieves (which I haven't read, but don't believe features Adam Scott) as the basis for a second film. Meanwhile, Empire reports that Gale Anne Hurd is attempting to adapt another Archer spy novel, The 11th Commandment, for television. The 11th Commandment follows a CIA assassin who must clear his name in an assassination attempt on the Russian president in order to avoid WWIII.

Archer is suddenly very popular in Hollywood these days. Besides those two spy novels, Deadline reported last year that Bourne Identity director Doug Liman is interested in directing a film based on Archer's fact-based historical novel Paths of Glory, about explorer George Mallory's three attempts to scale Everest back in the 1920s. (Of course, they'd have to change the title for a movie.)
Posted by Tanner at 6:47 PM

I'm so pleased that his stuff is doing well in Hollywood. Despite his many faults, there's something about him that is tremendously likeable and even admirable. Besides, you have to admire the balls of a man who, rather than trying to let the public forget his fall from grace, actually writes books about his stay in prison!

Definitely! As I mentioned in the post, I've never read any Archer, but I've been keen to try one. Is A Matter of Honor a good one to start with?

Incidentally, New Franchise has also got yet another Archer book up and running in development as a movie. The Hollywood Reporter reports that Brian D. Young has been hired to adapt False Impression:
http://www.hollywoodreporter.com/news/brian-d-young-jeffrey-archer-adapt-novel-321626

It's as good a book as any to start with, in that it has all of his strengths and all of his weaknesses. I know a lot of literary reviewer absolutely despise him, but this is as much due to his politics (which are of the right rather than the left)as to his writing. They also can't stand the fact that he seems practically indestructible. I think of him as the 21st century version of Edgar Wallace. He's not a stylish writer, but he's a great storyteller. The best description of him that I ever heard came from Ringo Starr who said "He strikes me as a nice enough fella, but he's the kind of bloke who would bottle your piss and sell it".