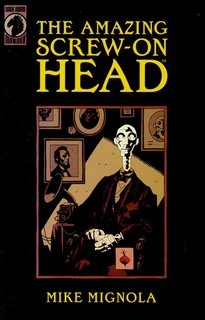 Speaking of spy shows with unusual historical settings, there’s even more than the setting that’s bizarre about this animated adventure. It’s so bizarre, in fact, that it definitely WAY transcends the spy genre, being more scifi/fantasy, but nevertheless the hero IS a secret agent, so it warrants a mention here.

Amazing Screw-On Head (voiced by Paul Giamatti) is a partially robotic secret agent who reports to President Abraham Lincoln. With the help of his manservant, Mr. Groin (Patton Oswalt), he screws his head onto a different, appropriate body for each mission. Unfortunately, we never got any more missions than the pilot, which aired on SciFi Channel. But presumably, he WOULD HAVE used different bodies for his other missions, since he has a whole collection.

Amazing Screw-On Head is based on a truly unique, truly wonderful one-shot comic book by Hellboy creator Mike Mignola. (I STRONGLY recommend that any comics fans check it out if they haven’t already... it’s really one of the very best comics I’ve ever read!) Truthfully, the cartoon pilot doesn’t come close to living up to its printed source material, but it’s still a visually striking, very funny show. Unlike the excellent animated Hellboy movie, Amazing Screw-On Head attempts to translate Mignola’s distinctive visual style to the screen... and does a pretty good job of it! Even though SciFi ultimately passed on the series, its creator, Brian ("Wonderfalls") Fuller is still shopping it around to other networks. Perhaps if sales of the Lionsgate DVD (which streets the same day as the Hellboy animated movie, February 6, 2007) are strong enough, that will help inspire one of them to pick it up!
Posted by Tanner at 9:58 PM