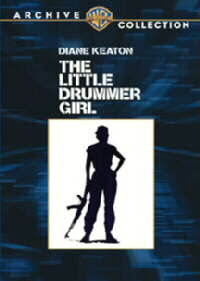 The price point is five dollars too high, the website is crappy, the search engine is bad, and there don't seem to be press releases announcing new titles (or any other real effort to get that word out), but I still really like the Warner Archive DVD-on-demand concept. I'm not sure when it was added, but I only just noticed another spy title the company is now offering in this format: The Little Drummer Girl, George Roy Hill's 1984 adaptation of John Le Carré's novel starring Diane Keaton and Klaus Kinski. Keaton plays an actress who gets caught between the Israelis and the Palestinians in a high stakes game of Middle East espionage when she's manipulated by Mossad officer Kinski in order to route out a terrorist. I've neither seen nor read The Little Drummer Girl, but I've long been curious to. I guess this is my chance... You can order Warner's DVD-R of The Little Drummer Girl and even watch the trailer here.
Posted by Tanner at 11:00 AM

The movie itself is a mixed bag. There are a lot of things about the movie I like, but, sadly, Diane Keaton is woefully miscast in the lead. Hollywood has never cast films of Le Carre's novels terribly well.

On the other hand, The Little Drummer Girl contains a nice cameo by the author himself.

Does anyone know if the On Demand discs contain any extras at all?

A friend ordered one. He said the print quality was good but it's bare bones.