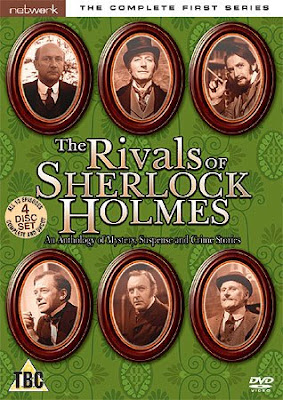 UK distributor Network has announced a DVD of the 1971 Thames TV show The Rivals of Sherlock Holmes: The Complete First Series, set for release on June 15. While Derek Jacobi wouldn't appear as William Le Queux's gadget-using proto-Bond "Duckworth Drew of the Secret Service" until the second season, the first season is sure to offer plenty of entertainment for spy fans as well. Based (unofficially) on the popular anthology books edited by Graham Greene's brother Hugh, The Rivals of Sherlock Holmes featured a different detective each week solving a different crime adapted from stories by various contemporaries of Arthur Conan Doyle. John Neville, Robert Stephens, Roy Dotrice and Blofeld himself Donald Pleasence were among the series' many guest stars. Acorn will be releasing this series on DVD in the United States this fall, as part of their overall deal with FreemantleMedia announced last year. The Region 1 DVD is due out September 1 and can already be pre-ordered from Amazon. It's unclear at this point whether either version will feature any extras.
Posted by Tanner at 5:30 PM