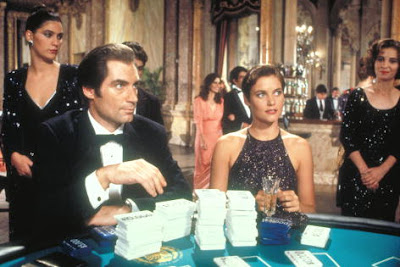 Can Bond Break the Bank?

The Hollywood Reporter reports the troubling news that James Bond's home studio, MGM, is searching for "any sort of capital restructuring that can avert a forced Chapter 11 bankruptcy reorganization. One big motivator: MGM's long-standing hold on the 007 franchise could come into play in a court-supervised reorganization. To avoid that, MGM's owners might consider giving up a sizable portion of their equity holdings." Ironically, United Artists (since swallowed up by MGM's lion) acquired their stake in James Bond when co-producer Harry Saltzman faced bankruptcy himself. A clause in his contract with partner Cubby Broccoli stipulated that he couldn't put up his share in their Bond company, Danjaq, as security. This led to lengthy legal proceedings, delaying production on The Spy Who Loved Me, before an equitable solution was reached by which the studio became equal partners in 007 with Broccoli. (Their cost in 1976? A scant $20 million, clearly recouped many times over in the past three decades.) Now MGM faces bankruptcy and clearly doesn't want to lose the lucrative cash cow that is Bond. Therefore, the trade speculates they'll be willing to part with a number of lesser properties in order to cling to the golden goose. The last thing they want is a judge deciding how to divvy up assets, which might well result in the studio losing its grasp on 007. "None of this is to say that [creditors] would come away with rights to Bond -- or even The Pink Panther or other core MGM film assets. But if [the] major debtholders are able to convert their holdings into equity, it could provide leverage to secure film-development rights of various lesser properties. And it would keep MGM -- and 007 -- out from under the gavel of a bankruptcy judge."

CTU, Where Are You?

The Hollywood Reporter reports that Freddie Prinze Jr. will join the cast of 24 next season as Davis Cole, "a recently returned Marine who runs CTU Field Ops and wants to follow in Jack Bauer's footsteps." Following this year's sojourn to Washington D.C., the eighth season will take place in New York.
Posted by Tanner at 12:56 AM

When Sony released Casino Royale in 2006, I figured that was the end of MGM. I'm astounded that they still exist.

Then again, I've been told that RKO still exists and still has the rights to the Saint books it based films on. I really need that explained to me.