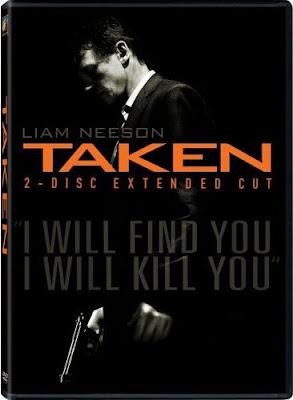 Lots of spy DVDs out this week! Liam Neeson leads the charge in Taken, not only the surprise sleeper hit of the winter, but also one of its biggest pleasures. (Movie review here.) Once you get past the incongruously atrocious first fifteen minutes, Taken develops into a non-stop cavalcade of righteous ass-kicking. Neeson is a former CIA operative whose daughter is kidnapped in Paris (as he predicted would happen if she travelled abroad!), thus setting him on this course of violence. To find her he'll destroy big chunks of Paris, even vowing to "tear down the Eiffel Tower" if he has to. Neeson's Bryan Mills does things that would even make Jack Bauer flinch. This hard-edge neo-Eurospy movie is a must for fans of Bourne or 24. And on DVD, it's available in an extended, "harder" cut previously seen in Europe! As usual with these things, there are several configurations from Fox, including single-disc DVD, Blu-Ray, and that annoying "Digital Copy" double-disc DVD that adds all the special features (including a making-of doc and an audio commentary with director Pierre Morel and screenwriter Robert Mark Kamen) onto the first disc, but then charges you more for the digital copy disc that most people will never use. 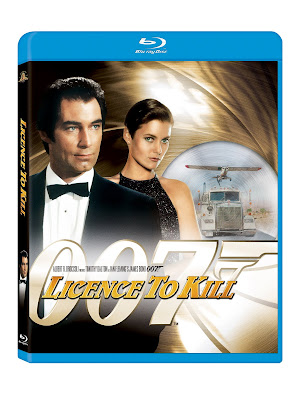 After being available for a few weeks in an exclusive bundle at Best Buy, two James Bond movies make their wider Blu-Ray debut this week as well. Neither Licence To Kill (1989) nor The Man With the Golden Gun (1974) are among the most famous or respected of Bonds, but each one has its charms. As a big-time Dalton Booster, I love his second movie almost as much as his first. Highlights include scenes (and villain Milton Krest, here assayed by frequent Mission: Impossible baddie Anthony Zerbe) freely adapted from Ian Fleming's short story "The Hildebrand Rarity" and that spectacular action sequence where Bond launches a one-man assault on Krest's yacht and ends up waterskiing barefoot behind a seaplane. I've had a strange relationship with The Man With the Golden Gun over the years. As a kid, it was one of my very favorites, thanks largely to the presence of returning comic relief character Sheriff J.W. Pepper. By college I disdained the movie for the very same reason, although I always appreciated Christopher Lee as one of the series' best villains. Now, no longer the stickler for seriousness in my Bonds that I once was, I enjoy Golden Gun for its utter strangeness. (Consider the scene in which Bond infiltrates a villain's compound only to be assaulted by a Sumo wrestler and a midget with a pitchfork who had been posing as statues. Or the false third nipple Q provides him. Or the bizarre means by which he ends up acquiring a golden bullet from a belly dancer.) It may be weak Bond, but I choose to view it instead as the Ultimate Eurospy movie!

Finally, we have a new Blu-Ray edition of the 1978 WWII spy/commando movie Force 10 From Navarone, a sequel of sorts to the David Niven classic starring Harrison Ford and a whole slew of Bond alumni including Robert Shaw, Edward Fox, Barbara Bach and Richard Kiel, the last two fresh off The Spy Who Loved Me.
Posted by Tanner at 9:49 AM