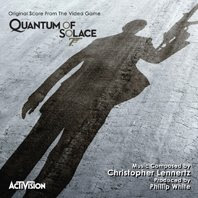 Two new spy CDs are available today at BuySoundTrax.com: Jerry Goldsmith's score for Sebastian (1968) and Christopher Lennertz's score for the Activision videogame of Quantum of Solace (2008). The latter (which is entirely different from David Arnold's score for the film), unfortunately, is a rare promotional CD available only as a premium for shoppers who spend $100 or more on the site. That's really too bad, because the track samples they make available sound great. I would love to have this CD! (But, like many fans, I'm sure, I sadly don't have $100 to spend there.) 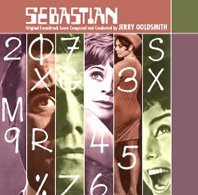 For those who haven't seen it, Sebastian is a rarity well worth seeking out. The always fantastic Dirk Bogarde plays a British codebreaker whose department (comprised entirely of beautiful women) is infiltrated by a Russian spy. Is it the lovely Susannah York, who Bogarde's slowly falling for? It's got a cool LSD sequence, but despite that it's very much not one of those Modesty Blaise-type Swinging Sixties spy trips. It's kind of hard to categorize, but it's entertaining (check out David's review) and it's got a really great Jerry Goldsmith score. I'll be happy to replace my copy that I burned from LP with this new release from Harkit, the same label that put out the Modesty Blaise score a few years ago. (If only they'd deliver on that mooted Fathom release that never materialized!)
Posted by Tanner at 3:38 PM

If I were you, I'd pass on anything produced by Harkit. Word has it--and it's from a very good source--that a reputable film score label will release a much-better Sebastian disc. I'll keep you posted.

I was about to warn you of the same thing.

Okay, so it's four years later and I can now say that the official CD release has happened! Intrada has released Sebastian---both the original tracks, the LP, and even the unused electronic cues composed by Tristram Cary.