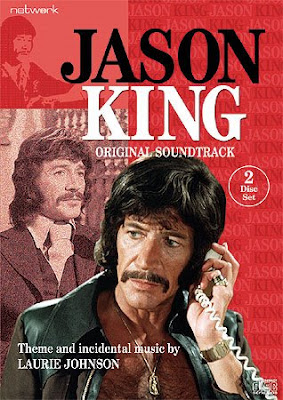 Network has announced the next release in their utterly fantastic line of CD soundtrack collections for classic ITC shows: Jason King! (Past announcements have yielded scores for Danger Man, The Champions, The Prisoner and others.) The music for Jason King was composed by Laurie Johnson, perhaps best known for his Avengers Theme and incidental music for that series. According to Network's website, "Never previously released and compiled from the original master tapes, this two-CD set comprises the themes and incidental music for Jason King, containing around 70 pieces of music which were specially composed for the series." The soundtrack to the high-camp Peter Wyngarde spin-off from Department S will be available to order from Network starting May 25. And they were even able to find a shot of Wyngarde wearing an open leather jacket over a bare, hairy chest to show off his pendant for their cover! Oh, wait; that probably wasn't very hard. Still, it's certainly appropriate! The series is probably best remembered today for Johnson's music, Wyngarde's irresistibly flamboyant performance, and the parade of garish fashions he clotheshorsed week after week. Oh, and his hairdo, of course. Anyway, the cover captures all of that, so it's awesome.
I realize that not all spy fans are as enamored of Jason King as I am. And I admit that if you watch it in order, the first few episodes are rather terrible, which is never encouraging. Especially since they particularly pale in comparison to the series it was spun off from, Department S. But if you stick with the series, you'll find a lot to like, especially if you enjoy the hedonistic side of the spy genre. King is John Steed's more dandyish side carried to the extreme. He wallows in luxury wherever he goes--including over the Berlin Wall. When King needs to cross to the East, he does so in style, riding inside a crate equipped with luxurious upholstery and, of course, stocked with champagne. It's a very fun, very over-the-top show with some fantastic music I'll be glad to finally have on CD. Then again, I know there are those who feel that Network seems intent on releasing the scores to every minor ITC show before it finally brings out the heavy-hitters, namely The Saint and The Persuaders! All I can say is, I have faith that our patience will eventually be rewarded. In the mean time, why not enjoy some terrific Laurie Johnson music?
Posted by Tanner at 3:28 PM

"I know there are those who feel that Network seems intent on releasing the scores to every minor ITC show before it finally brings out the heavy-hitters..."

You took the words right out of my mouth! Who else buys these releases besides you?

It's a shame Network hasn't released a complete version of John Barry's soundtrack to "The Legend of the Lone Ranger" since they released a superior dvd version to what's available in the US.

I think you misunderstood the comment in the blog, which is that music from ITC *tv series* which some would consider minor league are being releases before programmes like THE SAINT and THE PERSUADERS! (although this is entirely a matter of taste anyway).

Network does not have the rights to release music from ITC feature films such as the one you mention. Intrada has released scores from ITC films such as CAPRICORN ONE, CASSANDRA CROSSING, BOYS FROM BRAZIL etc, and it is in this sort of direction that you should be looking, not Network.

Incidentally, it's a bit of a sweeping statement that only the blog writer buys these releases; they do actually have their own following. The fact that you personally are not interested in them is neither here or there.

It's a shame that Network doesn't have the rights to release music from ITC films as Barry's "The Legend of The Lone Ranger" deserved to be released in its entirety. If Intrada was going to release such a soundtrack, I think they would've done so already.

Obviously the scores to the minor ITC series sell. If they didn't, Network wouldn't release them. No company is in the business of losing money. Personally I would release the heavy hitters first, then release the chaff that people like Jeepers like.

Intrada have a full release schedule - there is no reason at all neccessarily why they should have released THE LEGEND OF THE LONE RANGER by now. It might be somewhere on the future schedule, like a lot of other stuff.

As for your opinions as to what you think Network should release first (and actually I haven't stated my opinion one way or the other Delmo...), all I am saying is that other people won't necessarily agree with you. In the same way that perhaps record companies don't agree that THE LEGEND OF THE LONE RANGER should get a higher priority than, say, BOYS FROM BRAZIL.

I guess in short Delmo, no one gives two hoots what you think eh?

The same could be said about you, Jeepers.

Now, now, guys... Play nice! I know people get passionate about soundtracks (well, I know I certainly do!) and we all have our favorites and we all have our personal Holy Grails. And most likely everyone reading this blog can probably get behind both expanded John Barry releases and rare ITC releases, so I think we're all on the same page here!

It's a shame everything can't come out at once, but on the other hand, that also gives us a lot to look forward to. Whenever someone releases The Legend of the Lone Ranger, I'll be happy and eager to get it. (Although to be honest I still haven't gotten Starcrash due to finances, as much as I want it!) And whenever Network gets around to releasing my own personal soundtrack Holy Grail, The Persuaders!, I'll have a party dance with joy in some crazy Seventies Tony-Curtis-in-a-nightclub sort of way. (In fact, I'll probably also do that whenever my other biggest soundtrack Holy Grail, Dracula AD 1972, arrives in the mail, which should be any day now!)

In the meantime, I'm excited about having Jason King music, and that's not diminished by the fact that it's not The Persuaders! or The Saint. All good things in time. At the same time, I didn't pick up their Randall & Hopkirk because I wasn't that excited about that one. But I know there are people who are, and I respect that. For them, I'm happy it's available.

What are other spy-related soundtracks that people are dying to see released? Does anyone else have any ITC Holy Grails they're hoping Network will get around to?

"What are other spy-related soundtracks that people are dying to see released? Does anyone else have any ITC Holy Grails they're hoping Network will get around to?"

Like you, I'm eagerly awaiting The Persuaders! I must have every riff and melody memorized and I've been humming those cues going on five years now! Upon their release, I, too will do a Roger Moore-version of "The Chicken"!