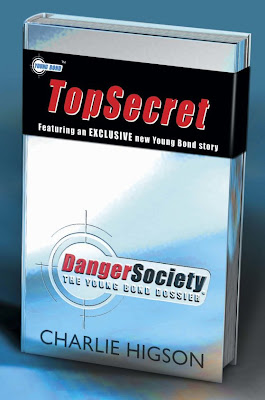 The Young Bond Dossier (the website, that is, not the book) has some more information on the previously reported upcoming companion volume to Charlie Higson's Young Bond novels. The site reports that the release date for Danger Society: The Young Bond Dossier has been moved up from late November to October 29. (This is a UK release date, of course; as with all the Young Bond books, a US release is probably still years away, after the entire series of books has been published.) Furthermore, YBD touts the companion's brand new Bond short story by Higson as "the longest James Bond short story yet written, surpassing the previous record holder, 'For Your Eyes Only' by Ian Fleming." The title of the story is still being kept under wraps, but a preview of it will appear in next month's UK paperback release of Higson's fifth and (for now) final Bond book, By Royal Command. The high-res cover artwork comes courtesy of YBD.
Posted by Tanner at 12:30 AM