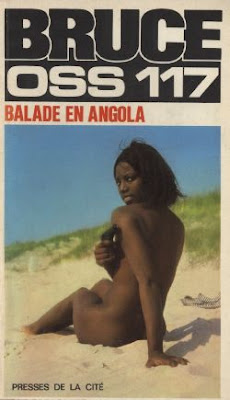 If there's a third OSS 117 movie (in the modern parody series, I mean), it looks like it will follow the lead of the third Austin Powers movie and be set in the Seventies. It's not a decade widely thought of for spying, and indeed the original cycle of OSS 117 movies only made it as far as 1970 theatrically (and then under the auspices of a different producer) before being relegated to TV for a pilot that was aired only once and didn't lead to a series. Of course, Roger Moore might disagree; the Seventies were his heyday as Agent 007, and indeed the decade produced one of the series' best films, The Spy Who Loved Me.
OSS 117 star Jean Dujardin said in an interview with French magazine Cine-Live that a third film, should there be one, would take place in Africa and would find OSS 117 being assisted by a beautiful, twenty-three year old black woman. Furthermore, he promised it would continue to push boundaries. "I would really like to do a third one - and the last - with a growing old OSS, carrying a signet ring and wearing half-moon glasses. The film would be set at the end of the Seventies, under Giscard and Bokassa." (Valéry Giscard d'Estaing was President of France from 1974-81 and for much of that time his administration was in bed with the Bokassa regime in the Central African Republic, although France ultimately backed Bokassa's ouster. Bokassa himself is a fascinating figure who declared himself first Emperor and later, apparently, the 13th Apostle.)
Last weekend director Michel Hazanavicius confirmed this in a Q&A following a Los Angeles screening of his newest film. "If there's a third one," he said, "I think it would be set in the late Seventies in Black Africa." The object would be to send up the hero's racist attitudes about black people in the same way the first movie addressed his views on Muslims and the second his casual anti-Semitism. (Jean Bruce's paperback hero, by the way, made several trips to Africa.)
While the purist in me would rather see OSS 117 remain forever in the Fifties/Sixties Golden Age of Spying, I could actually see the early Seventies working quite well as a setting. I can picture Dujardin decked out in Roger Moore's safari suits or the cravats and turtlenecks espoused by The Persuaders!, Mister Jerico and the Mission: Impossible team of that decade. Fashion-wise, it's a good period to parody. But the late Seventies seem less fertile, less original in that respect. Leisure suits and disco? I feel like that's been done. Still, this creative team has already struck gold twice in this series, and I have no reason to doubt they can do it again, no matter what decade they choose to send up. Furthermore, the Giscard/Bokassa scandals do seem like ripe territory to mine. I'd gladly put down money right now to see Dujardin's French secret agent in any decade. Because no matter what era he's operating in, we know that his own wolrd view is sure to remain rooted in outdated postwar values, and therein lies the comedy.
Posted by Tanner at 3:14 PM