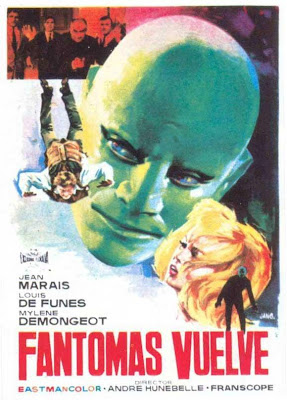 Possibly spurred on by the success of the revived OSS 117 series, director André Hunebelle's other big Sixties franchise is getting a new lease on life. Variety reports that Christophe Gans (Brotherhood of the Wolf) is writing and directing a new $60-70 million dollar film based on the masked supercriminal created in 1911. Fantomas has been a fixture of French cinema since the silent era, but is probably best known to spy fans through Hunebelle's campy Sixties trilogy, which I would lump squarely in with the "costumed adventurers" offshoot of the Eurospy genre. While the OSS 117 and in-the-works Jerry Cotton revivals have been comedic takes on series that were more or less serious in the Sixties, the new Fantomas will go the opposite direction. Hunebelle's Fantomas movies, starring Jean Marais in dual roles, were very tongue-in-cheek; Gans' version will be much grittier and closer to the series of books that spawned the character. Fantomas won't the the first Sixties masked avenger Gans has tackled, either; immediately following Brotherhood of the Wolf the director planned a new version of Diabolik starring Mark Dacascos, but for better or worse it never came to be. (While no one will ever top Mario Bava's masterpiece, I do think the character has a lot more to offer and would have personally welcomed Gans' interpretation.) According to the trade, Gans' Fantomas adaptation is inspired by The Dark Knight and "sees Fantomas facing off with a villain of equal or even more dastardly dimensions. Pic will shoot in French and English, and begin casting shortly." The plan is to roll cameras in late 2009 or early 2010.
Posted by Tanner at 1:28 AM

Did this film ever get off the table? I saw the first Marais Fantomas on some fuzzy UHF station. I never saw the two sequels. I've been looking for an English dubbed or sub-titled DVD for years. Gaumont released only a French version.