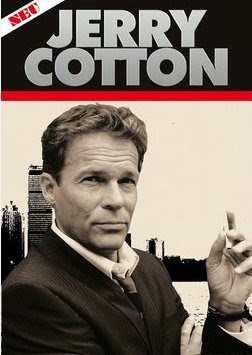 A press conference in Berlin yesterday marked the commencement of filming on the new Jerry Cotton movie, which was first announced back in 2007. Jerry Cotton, originally played by American star George Nader in a series of Sixties Eurospy movies like Death In a Red Jaguar and Deadly Shots On Broadway, was a New York-based FBI agent in his original incarnation. (They're available in Germany without English subtitles, although the Dutch DVDs do offer those.) The new version, from the makers of the popular Wixxer films (which parody the Edgar Wallace crime movies so popular in Germany during the Fifties and Sixties), reimagines Cotton in much the same way that the new OSS 117 films reinvent that Sixties Eurospy hero. Whereas the Sixties movies were serious, the new version is a comedy. Fifty-three-year-old German actor and comedian Christian Tramitz (who also starred in Der Wixxer) steps into Nader's shoes as Cotton; Christian Ulmen plays his sidekick Phil Decker (originated by Heinz Weiss). Monica Cruz (sister of Penelope) plays the newest "Cotton Girl," Malena, who producer Christian Becker describes as a femme fatale who turns Cotton's head.
I'm not sure if that poster image at left (which apes the look of older Cotton book and DVD designs) is official or not, but it's all over German-language websites, including plenty of seemingly reputable news sites, so I would guess it's legit. 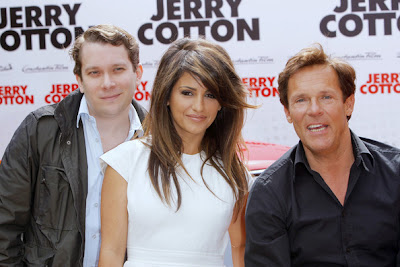 Becker told Screen Daily that the new film (called, simply, Jerry Cotton) will be "a fantastic new interpretation which will be like the way people approached Starsky & Hutch. It won't be a parody because we take the character of Jerry Cotton very seriously but we see him a bit like Inspector Drebin in The Naked Gun." So, despite not being a parody... it sounds like a parody. What's unclear is whether it will recreate the Sixties milieu of the original films, as OSS 117: Cairo Nest of Spies and OSS 117: Lost In Rio did so successfully, or if the character will b 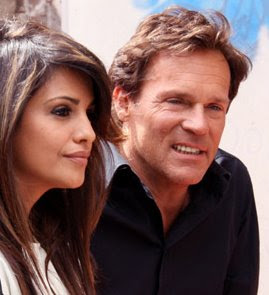 e contemporized. The red Jaguar E-Type on hand at the press conference would seem to indicate the former, although such a car could obviously make an appearance in a modern-day movie as well. Jerry Cotton is due out in Germany at the end of this year. Hopefully international distribution will follow, although the Wixxer films still remain unavailable on DVD in English-speaking countries. 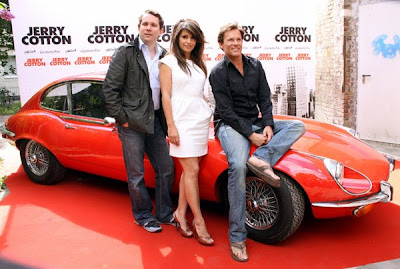 OSS 117, Jerry Cotton, and Fantomas are back or coming back but there still isn't a new version of Matt Helm, U.N.C.L.E., or Modesty Blaise?

It would be nice to see a serious remake of Cotton though, it sounds like a delightful film.

There also a Dr. Mabuse film allegedly in production for 2010.

Yeah, that Mabuse movieis from the same people behind Der Wixxer and Jerry Cotton. I'd really like to see all of them, so I hope they all get released with English subtitles at some point!

You're right, Dustin. Actually, I think he looks kind of like Brosnan in that picture! (A little bit...)

It's strange, Delmo, isn't it? I guess the Europeans are more on the ball than us Americans about the profitability of old spy franchises right now! I did just read a Hollywood Reporter story predicting that the success of Star Trek would prompt a new wave of TV remake movies, so maybe UNCLE will surface again. Of course they keep talking about Matt Helm (most recently at Paramount), but I'll believe it when I see it. Modesty is the character I'd most like to see revisited--and done right.