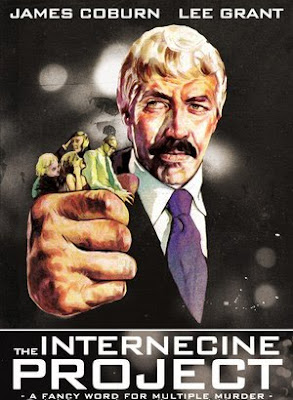 The Internecine Project Due Out Next March

Late last year I reported that Code Red DVD would release the rare James Coburn spy thriller The Internecine Project on DVD in the summer of 2009. Then summer came and went, and we never heard anything else about that disc. Code Red's been going through some changes and a lot of their announced titles dropped off the schedule, so I kind of assumed that we'd never see The Internecine Project. Luckily, that's not the case! Today DVD Sleuth reports that the title "will be released by Code Red offspring Scorpion Releasing on March 29, 2010." And they've got artwork to back that up (using that cool poster art and helpfully explaining the titular vocabulary), so it looks like it's really happening this time. Which is excellent news. "Internecine" means "pertaining to multiple murders" which gives you quite a good idea of what this movie's about. Coburn plays a former CIA agent appointed to a flashy new political post. But to get it, he'll have to remove anyone with knowledge of his shadowy past. To do so, he concocts a diabolical plan to get all of his enemies to kill each other. Surprisingly, this dark, dark thriller is directed by one of the five credited directors of 1967's farcical version of Casino Royale, Ken Hughes--and written by Barry Levinson!
Posted by Tanner at 6:09 PM

While I'm glad this is still on for release, I don't know anything about the company releasing it. I just hope it's a decent transfer.

This film has been available on DVD in the UK for a while (courtesy of Fremantle. I can only hope that this release will be better quality than the UK release, which is not good. Grainy and damaged picture, with even worse sound!