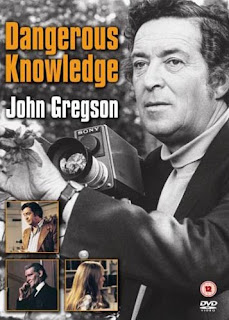 DVD Sleuth reports that UK company Simply Media will release the 1976 British spy series Dangerous Knowledge on Region 2 DVD next week. The six-episode miniseries stars John Gregson, Patrick Allen and Ralf Bates. Director Alan Gibson directed my favorite Hammer picture of the Seventies, Dracula A.D. 1972 as well as its sequel The Satanic Rites of Dracula. Gibson also directed the stellar episode of Hammer House of Horror that guest-starred Peter Cushing, "The Silent Scream," as well as episodes of Thriller and Quiller for TV, the latter of course a spy series based on the Adam Hall novels. And I only really mention that because I like typing "Thriller and Quiller." According to DVD Sleuth's description of the plot, Gregson stars as Kirby, an ex-Army Intelligence officer. "Now he’s a mere insurance salesman. Or is he? Returning from a trip to France, Kirby finds himself being shadowed by two agents and the ‘innocent bystander’ who helps him escape just happens to be the daughter of a spymaster." I've never heard of this before, but it sounds good! The Seventies were a fruitful decade for high quality spy TV coming out of Britain.
Dangerous Knowledge retails for £14.99, though Amazon.co.uk has it for less.
Posted by Tanner at 3:24 PM

NEVER HEARD OF THIS EITHER. SOUNDS READY FOR A REMAKE...

Sadly, John Gregson died of a heart attack shortly before the original transmission of 'Dangerous Knowledge' on British television.

I hope 'Quiller' comes out on D.V.D. some day. It was brilliant as I recall.

I'd love to see Quiller on DVD because I'd love to SEE it, period! Never had that opportunity. It's very frustrating knowing that there was a QUILLER TV series and not being able to watch it!

Tanner - I wouldn't look forward to seeing the Quiller TV series out on DVD any time soon. It wasn't too successful in its day and apparently the tapes have been scrubbed.

Maybe the Beeb will one day look into the possibility of buying back overseas broadcast copies (if any exist), but I'm not sure there's enough of a perceived audience to warrant the trouble and expense.

A shame, because it wasn't too bad, although the production values were a little threadbare.

Happily, the Quiller tapes don't appear to be quite as scrubbed as everyone's always thought they were. At least one episode exists in the BFI archives and was shown at a BFI Southbank tribute to Brian Clemens last year. Whether more survive or not (and I'd bet there are at least a few more), I'd still love to see whatever remains made available. Pie in the sky? Maybe. But I'd like to see it!