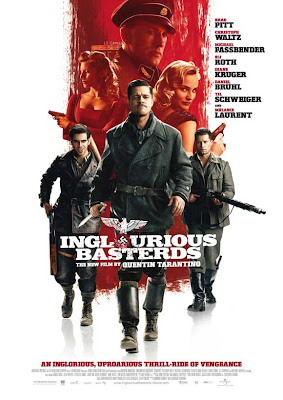 Movie Review: Inglorious Basterds (2009)
Like most Quentin Tarantino movies, Inglourious Basterds defies easy categorization. It is many genres at once: a spy movie, a Western, a revenge movie and, lastly, a war movie. It may be marketed as a war movie, but it’s more of a wartime movie than a war movie per se. There are no battles, no scenes on the front lines, and very few with men in uniforms. And I don’t think I’ve ever seen a WWII picture with so few vehicles before! Most of the action of Inglourious Basterds takes place behind enemy lines, in Nazi-occupied France. The "Basterds" of the title are described as "an American Secret Service outfit" and operate entirely behind German lines. Under the leadership of Brad Pitt’s hillbilly sergeant Aldo "The Apache" Raine, the group of Jewish-American soldiers’ singular mission is to kill as many Nazis as possible in horrific ways, scalping their victims and spreading panic amongst the German ranks. Raine reports to the OSS, America’s wartime intelligence service and precursor to the CIA.
The British, meanwhile, send their own spy (Lt. Archie Hicox, Michael Fassbinder) in behind enemy lines to meet up with the Basterds and a beautiful German actress turned British agent (Diane Kruger) in order to carry out Operation Kino. Operation Kino is a plan concocted by General Fenech (Austin Powers’ Mike Meyers, as usual channeling a good dose of Peter Sellers) and Winston Churchill (Rod Taylor, totally unrecognizable from his Sixties spy days in films like The Liquidator and The High Commissioner). The goal is to take out a good chunk of the German high command when they attend the gala premiere of Joseph Goebbels’ newest Nazi propaganda film, Nation’s Pride. No one involved in it, however, is aware that the proprietress of the theater where it’s being held, Shosanna (Melanie Laurent) is a Jew hiding in plain sight with her own plans for revenge at the premiere. 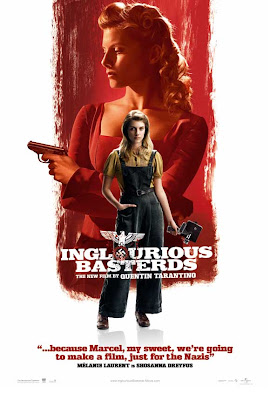 Inglourious Basterds is divided into chapters, many of which amount to single, lengthy scenes, giving it the pacing of a play. (Or several loosely connected one-act plays.) The length of the scenes, of course, is quite deliberate. Tarantino masterfully builds the suspense to Hitchcockian degrees during the incredibly tense scene in which all the spies meet up under the eyes of a German officer.
Despite the play feel, the staging is anything but theatrical; in fact perhaps never before has any movie been so aware of being a movie! Tarantino piles on the cinematic references (including using the name of Eurospy director Antonio Margheriti as one character's alias) so fast and furious that they’ll delight any ardent cinephile. Tarantino is an artist, though, and his references actually add to his art. This isn’t just a blender of scenes ripped off from other movies. This is a filmic Finnegans Wake. The myriad references and allusions (of which I don’t pretend to have caught nearly all) add further layers to the story he’s telling, enhancing it for those who can recognize and appreciate them. Despite all these allusions, though, the film isn’t pretentious. In fact, it’s surprisingly light at times. When it’s violent, it’s brutal, but there are a lot of laughs in the film as well. Both from jokes and from violence so sudden, extreme and, frankly, desired, that the viewer can’t help but laugh. Audiences want to see Jews slaughtering Nazis. It’s great cinematic revenge for the worst atrocity of the 20th Century. Yet Tarantino anticipates our reaction, and gently scolds us for it while indulging us. Adolf Hitler (a deliriously cartoonish, swastika cape-wearing portrayal by Martin Wuttke) behaves the same way while watching the Nazi propaganda film-within-a-film. As the young Nazi hero of Nation's Pride slaughters American soldiers, Hitler laughs out loud. Just as we do when Nazis in Inglourious Basterds are punished. Above all else, Inglourious Basterds is about the power of cinema: its power to satisfy us, its power to allow us to vicariously work out our own aggressions, its power to surprise us by contradicting what we know. To be any more specific, sadly, would spoil the film–and it has one of the best endings in movie history, which I’d really hate to spoil! 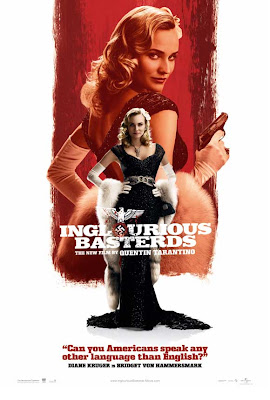 Beyond being a great movie, there is even more here for spy fans to latch onto. While he’s publicly bitched about not getting to direct Casino Royale, and mooted the notion of making a trilogy of films based on Len Deighton’s "Game, Set, Match" trilogy, this could be the closest Tarantino ever gets to directing a full-on spy movie, and he can’t resist acknowledging the tropes of the genre. (Just look at the posters!) We get Brad Pitt in a white dinner jacket for most of the climax, including the movie’s funniest scene in which the Appalachian sergeant tries to convince the enemy that he’s Italian. We get beautiful women in sexy dresses packing pistols. We get another nod to a spy-like series of wonderful, pulpy novels, as one character reads a French copy of The Saint In New York, recalling John Travolta’s affinity for Modesty Blaise in Pulp Fiction. And, above all, we get gadgets. One of the basterds uses a glove pistol that fires a small caliber bullet at close range when he punches someone. I was thrilled when I saw this gadget in action in the film, because I remembered it from a book that I loved to thumb through when I was a kid called OSS Special Weapons and Equipment: Spy Devices of WWII by spy expert H. Keith Melton. (He later wrote a follow-up on CIA spy devices of the Cold War, but they weren’t quite as cool.) It was a catalog of 1940s spy gadgetry, and I just loved it. When I saw this weapon in the movie, I thought gleefully Tarantino must have read the same book I did! Then I realized, no, this is Tarantino, and this film is a cornucopia of movie references. Tarantino must have seen it in another movie. It’s probably just one of hundreds of film references I’m not getting, but they’re all working together so well that it doesn’t matter, and they’ll only make rewatching this masterpiece all the more rewarding in the future, with lots of layers remaining to be peeled back. Inglourious Basterds is one of Tarantino's best, and one of the best films of the year, for sure.
Posted by Tanner at 12:22 AM

I liked the film but the ending before the ending kinda took me out of the film.

In an interview with Michael Fassbender he mentions that Tarantino wanted him to be like a young George Sanders. He had him watch all of Sanders' films, including the RKO Saints.

I think Michael Fassbinder would've made a better Saint than DS. Maybe he'll be in the running to replace Craig as Bond at some point.

Inglorious Basterds is really a good and outstanding movie. Tarantino really succeed to get all of the movie genres in one movie that you can see again and again!