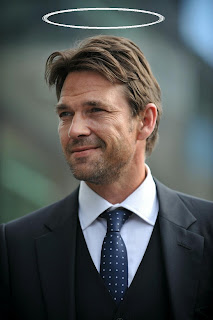 Is Dougray Scott The New Saint?

For months now, Saint Club Secretary Ian Dickerson (who is actively involved in the development of a new Saint TV show) has been dropping hints on the forums at CommandBond.net about the identity of the next TV Saint. Production on a new Saint series has been rumored for years now, and came remarkably close to fruition in 2008 when James Purefoy was announced as the next Simon Templar in a series to be produced by Homicide: Life On the Streets veterans Tom Fontana and Barry Levinson (who was also to direct the pilot), Rome co-creator Bill MacDonald and the son of TV's first Saint, Geoffrey Moore, among others. For better or for worse (depending on who you talk to), that incarnation fell apart and Purefoy moved on to star in the very Saint-like (but not nearly Saint-like enough!) NBC series The Philanthropist, produced by Fontana. Dickerson's hints pointed fairly strongly toward Dougray Scott as the new Saint (but also led to speculation on the forum about actors ranging from Spooks' Rupert Penry-Jones to Eddie Izzard), but formalities have kept him from confirming. Now sharp-eyed forum member Tybre has spotted a post on Roger Moore's official website wherein the erstwhile Templar himself, Sir Roger, appears to have done so! Moore goes as far as confirming the initials D.S., which don't really leave room for a lot of other likely candidates. He also says that shooting (whenever it happens) will take place in Vancouver, and that he himself will take a small role in the pilot which could likely become recurring should it go to series.
Dickerson has previously revealed other details about the newest take on The Saint at CBn: namely that Simon will be driving an "eco-chic" Fisker Karma sports car and T.J. Scott is directing. I'm a fan of Scott's work on Sam Raimi's syndicated TV shows Hercules and Xena back in the late 90s (when he also directed an episode of Raimi's short-lived spy series Spy Game), and in many ways he seems a better fit for The Saint (which should be fun) than the more prestigious Levinson would have been. I would have loved to have seen Purefoy essay the role, but I'm still eager for this new version of The Saint to get rolling and I wish Dougray Scott all the best under the halo! Scott is well known to spy fans from his roles in Mission: Impossible II, Hitman and, in his best spy foray, Enigma.
Posted by Tanner at 11:51 PM

He has the charisma to play it suave - does when the going got nasty - he'd be better.

I liked the idea of Purefoy, because he exuded a sort of class and refinement that I feel the Saint should have. But Dougray could bring it into this century with brutish charm - that is suave charm but also a sense of direct action.

Lets see where the bsll bounces.

Ooops some gibberish typing. That's what happens after a night on the tiles in Melbourne.

Delete 'does' from third para.

And of course it is 'ball' in the last sentence...either way I am excited!

"which should be fun"
Exactly.

John Barrowman from Torchwood would be an excellent Saint.

Did he finally sign? Is this written in stone?