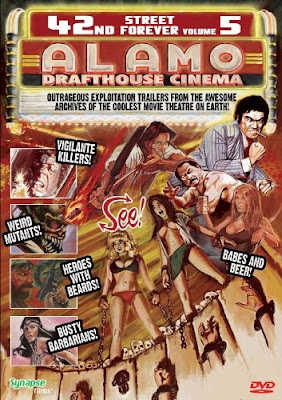 DVD Drive-In has a review of the latest cult movie trailer compilation from Synapse Films, 42nd Street Forever Vol. 5: Alamo Drafthouse Edition. And, apparently, it includes a slew of trailers for spy titles! Among them, the rare 1965 Eurospy spoof James Tont: Operazione U.N.O. (discussed at length in the DVD Drive-In review), Antonio Margheriti’s ridiculously fun 1966 Eurospy flick Lightning Bolt (aka Operation Goldman), and perhaps most tantalizingly, one of the Japanese spy films Woody Allen edited into his parody What's Up, Tiger Lily?, International Secret Police: The Diamond Trap. And that's not the only Asian Interpol import; there's also Mission: Thunderbolt (1983), about an Interpol agent fighting gangs. The description of this one on DVD Drive-In sounds pretty hilarious. Again, these are only trailers, not films, but it will still be great to have them preserved on DVD. Lightning Bolt is available in Region 1 (in beautiful widescreen, no less, and with the trailer as an extra), but the others are sadly not, so trailers are as close as we'll come to owning the films for now. As well as spy movies, the disc includes trailers for all genres of exploitation films from the Sixties, Seventies and Eighties including barbarian movies, blaxploitation films, sex comedies and more.
Posted by Tanner at 6:08 PM

Okay, now you've confused me...International Secret Police: The Diamond Trap - I take it this is the third film in the series???

Hmm...Thanks lot. I will go for dvd only. Can you please tell me how would i get it ?

Just click on the link when I first mention the title at the top of the story. That will take you to Amazon.