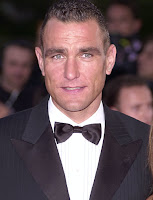 Yeah, that's not much of a headline, I know. But that's how I talk in real life. Things having to do with things that I like tend to come out in blurts, usually with the words "James" and "Bond" somewhere in there, and occasionally with "Howard Chaykin." Ask my girlfriend. She puts up with that a lot. Anyway, that's also pretty much all there is to this article in The Hollywood Reporter: a few Bond references and a few other spy-relevant names dropped, but not much solid information to go on. Based on what is there, though, I'm excited all around! The trade reports that British footballer-turned-movie badass Vinnie Jones (Lock, Stock and Two Smoking Barrels) will be coming to TV in two separate spy roles. The first will be a guest turn on Chuck as "an expert hitman with a soft side" named–hee hee!–Karl Stromberg. The second project elicits a more direct 007 reference from the star. "The untitled new series, based on an upcoming comic book series by Howard Chaykin, centers on Jake Noble, an international spy who teams with his long-lost daughters he never knew existed." Jones tells the trade, "I never really thought of TV before as a medium for me. However, with it becoming such a source of creativity these days, and this project with its modern James Bond style and feeling to it, I couldn't resist." Just as I won't be able to resist watching it. Chaykin, of course, is a top-notch comic book creator, a writer and artist whose spy credits include some Nick Fury issues and the 1981 For Your Eyes Only movie adaptation for Marvel. He's currently producing a very adult new take on 1930s adventure hero Dominic Fortune, a character he created decades ago. I haven't heard anything else about this upcoming comic book on which the show is based. The show, interestingly, doesn't yet have a network or syndication deal. Instead, twenty-two episodes will be independently produced. This is an interesting model we're seeing more often these days (the new Saint series is following a similar pattern for the time being, although the producers hope to pre-sell it to a network, I believe), and hopefully it will produce some creative results.
Posted by Tanner at 9:24 AM