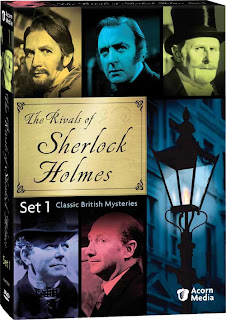 New Spy DVDs Out This Week
First up, Americans now have the chance to own The Rivals of Sherlock Holmes: Set 1, out today from Acorn Media! I reviewed this teriffic series earlier this year when Network released a Region 2 version in the UK; I'll have an entirely new review of the US version up later today. But the episodes included are exactly the same, and the American version actually offers a nice bonus feature not included on the R2 discs. "The Case of the Dixon Torpedo" should be of particular interest to spy fans, as it dramatises (in fine fashion!) what surely must be one of the earliest examples of the modern spy story in the "reluctant agent" subgenre made popular by Len Deighton. "The Missing Witness Sensation" also deals with matters of national security, and other episodes feature notable veterans of Sixties spy TV and film. Foremost among them, You Only Live Twice's Blofeld, Donald Pleasence, plays William Hope Hodgson's ghost-hunting detective Carnacki in "The Horse of the Invisible." This one's a must for Holmes fans, and should prove of interest to modern spy fans as well. It's considerably cheaper on DeepDiscount than on Amazon. 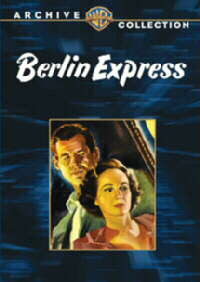 Warner Bros. continues releasing rare catalog titles through their "DVD on demand" Warner Archive program, and today's batch includes an intriguing spy title: Berlin Express (1948). According to Warner Bros., the setting of the film is "as riveting as the action: Berlin Express was the first American movie filmed in post-World War II Germany. Director Jacques Tourneur (Cat People, Out of the Past [and, of course, Night of the Demon) and cinematographer Lucien Ballard (The Wild Bunch) capture the ruin of a bombed and devastated nation that just a few years earlier threatened to rule the world." They describe the story of four train passengers who must thwart a Nazi-backed assassination plot as "a tense espionage thriller." Berlin Express stars Robert Ryan, Merle Oberon and Paul Lukas. As a sucker for train movies, I'm certainly intrigued by this one! Berlin Express is available exclusively through the Warner Archive site.
Posted by Tanner at 3:29 PM

Re Robert Ryan: Have you ever seen a 1965 B&W spy film called The Dirty Game with Henry Fonda, Maria Grazia Buccella (who auditioned for Domino in Thunderball) and a cast of Euro who's who. I love this gritty movie, an attempt at a more realistic spy film.

Directed by Terence Young no less! Yes, I've seen it and I like it and I certainly intend to review it one of these days... but I've only seen the severely cut American version. Do you have access to the much longer European cut? If so, please send me an email. I'd love to see that!

Sorry, Tanner, I've been looking for the 4 episode European version for years. I've only seen the US cut on DVD and in the theater. Possibly a print still exists in a forgotten film storage warehouse. The search continues. The reason I like it so much is because I was a child when I first saw and it's one of those films that was imprinted, like Night Train To Paris.