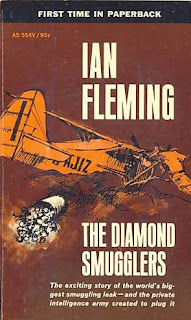 The Ian Fleming Movie That Might Have Been
Okay, I meant to post this a week ago, but better late than never!  Wes Britton of Spywise and The Spy Report alerted me that the Times of London had an article by Jeremy Duns about prolonged attempts in the Fifties and Sixties to turn Ian Fleming's 1958 non-fiction, non-Bond book The Diamond Smugglers

into a film.  In my obituary of actor Richard Todd, I mentioned that, according to his autobiography, he had attempted to make a movie of The Diamond Smugglers in the Sixties.  I've long been curious for more information on that film that might have been, and Duns' fantastic article fills in many details.  Duns, of course, should be familiar to spy fans as a spy fan himself (and longtime contributor to the CommanderBond.net forums) who became a (quite distinguished) spy writer with the publication of his first novel, Free Agent

, last year.  He's been researching this topic for quite a while before publishing this article, and he's dug up some really amazing information on a previously unknown chapter in the history of spy movies.  The story involves famed British studio Rank, Richard Todd, Steve McQueen and novelists Fleming, Kingsley Amis and John Cleary, all of whom contributed to the treatments and scripts for the film that wasn't.  Duns also draws connections between some of these players and Cubby Broccoli and Harry Saltzman. 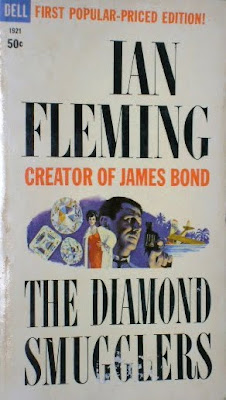 What he doesn't cover, however, is who holds the film rights to The Diamond Smugglers today.  While the book is based on actual people and events, Fleming fictionalized the lead character as secret agent John Blaze.  That means there's a whole potential Fleming-based franchise still waiting for some enterprising studio to exploit... and I can't believe it hasn't been done yet!  Just the marquee value of "Ian Fleming's John Blaze" should carry serious weight with audiences, even today.  And even though Fleming only wrote one book about Blaze, presumably that wouldn't stop an intrepid producer from further exploiting the character in the same way Broccoli and his heirs have with 007 since running out of Fleming novels.  Pay attention, studio execs, this is gold!  Or, should I say, diamonds.  (Sorry.)
Posted by Tanner at 8:30 AM