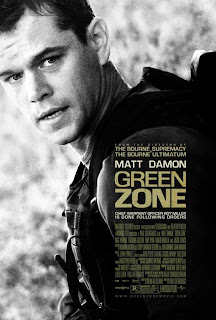 Now pay attention, Marc Forster: this is how it's done!  Paul Greengrass is the undisputed master of the "put you in the middle of it" modern style of action filmmaking.  Working with the same second unit director (Bourne alum Dan Bradley) as Marc Forster did on Quantum of Solace, he manages to situate you perfectly while making you feel like you're right in the thick of things.  This is what Forster failed to do.  I was never situated in the action scenes in Quantum (particularly the opening car chase); I generally had no idea what was going on. Which may well have been the desired effect (as Forster has claimed), but it was frankly the wrong effect for an effective action movie.  First and foremost, the viewer needs an established sense of spatiality in order to follow and enjoy the mayhem.  Greengrass understands this.  He may leave the viewer disoriented at times (and thrillingly so), but the viewer knows why he's disoriented.  Granted, the director had time to hone this craft.  The Bourne Supremacy was a not entirely successful test case before the style gelled in The Bourne Ultimatum.  I'm happy to report that it gels again in Green Zone.


Green Zone is at once a war movie and a spy movie.  Matt Damon plays U.S. Army Chief Warrant Officer Roy Miller, assigned to locate WMD in the early days of the American occupation of Baghdad (circa 2003).  He's frustrated that his unit keeps coming up empty at site after site, and becomes convinced that it's not his unit that's faulty (as the brass seem to believe); it's the intelligence they're operating on that's faulty.  He manages to get himself seconded to the CIA, under local station chief Martin Brown (Brenden Gleeson), who agrees with Miller that the intel is bad.  I'm not sure how realistic it is that an active Army officer could temporarily transfer into the CIA, but in the case of the film this conceit allows Miller to charge around Baghdad on his own and in civilian duds, Bourne-style, in his relentless search for the truth–and for the source of the intel, an elusive asset codenamed "Magellan."

From the opening moments of Baghdad under siege (which truly convey shock and awe in spectacular cinematic style) to the breathless final nighttime foot chase (also involving cars, Humvees and a helicopter) through the city's streets, Green Zone delivers nonstop thrills.  I know that's a cliche, but in this case it's absolutely true.  Like in The Bourne Ultimatum, the action almost never lets up.  Every setpiece is astonishing, from a tense sniper standoff to a close-quarters firefight in an upscale home to a breakneck hunt for a Saddamist general lying low.  The firefight leads to the discovery of a notebook that might be the clue to the whereabouts of one of the major players in that infamous deck of cards signifying Iraq's Most Wanted–and a lead on the intelligence Miller's after.  But no sooner do Miller and his squad recover the notebook than a Special Forces team (led by an unrecognizable but excellent Jason Isaacs, looking a little like Bono) show up and attempt to wrest it away–along with their prisoners.

Miller is under siege on all sides, not only from the enemy, but apparently also caught up in the midst of a power struggle between different factions of his own forces as well.  And for once in this kind of story, the CIA are the good guys, which is a refreshing change of pace, especially for Greengrass and Damon, since the same Agency pursued Jason Bourne through their last few film collaborations.  The other side of the equation is personified by DIA (Defense Intelligence Agency) man Clark Poundstone (Greg Kinnear at his smarmiest), the sort of high-level manipulator with no concern for his agents and soldiers in the field found in a dozen John Le Carré novels.  Somewhere in the middle is the Judith Miller-ish Wall Street Journal reporter Lawrie Dayne (Amy Ryan), who wants to find the truth, but is a little too easily accepting of information she receives from government sources, which may not be it.

Let me address the political issue surrounding this movie right now: there is some sort of misguided, unfounded online backlash against the film, perhaps because of star Damon's own outspoken views.  That is completely in error, and may be partially keeping audiences from seeing the finest action thriller in years.  (Obviously the Iraq War content itself is also a huge factor there; the subject matter remains box office poison.)  This is not a political film.  It is an action movie with an intriguing political backdrop, but not by any measure a polemic.  Granted, it is easy to take the high ground with the benefit of hindsight.  We know now that there were no WMD in Iraq.  But the movie doesn't beat a dead horse; it simply uses that particular moment in recent history as the ideal setting for an exciting spy story.  Action and (truely harrowing) thrills are at the forefront in Green Zone; not politics.

Personally, I feel like excitement is something that's been missing from modern war films for quite a while.  Yes, I am aware that combat is horrific and takes a terrible psychological and physical toll on those brave men and women who undertake it.  But so is spying.  In both cases, the grim reality doesn't mean that the fiction cannot be thrilling.  I remember vividly the edge-of-my-seat excitement and utter dread that I felt watching The Longest Day

as a child (and that was almost three decades after the film was made!); I remember feeling like I was actually there.  I got that same visceral thrill from Green Zone.  Paul Greengrass puts the audience right in the middle of the action, and we feel all the excitement and all of the terror.  The aforementioned sniper scene is probably the most intense combat action seen on the big screen since the opening moments of Saving Private Ryan.

The moment-to-moment suspense is palpable, and Greengrass turns it up to the highest degrees that the audience can endure and still be entertained.  (And boy is it entertaining!) The movie only fails to generate suspense when you stop and think about the big picture.  Since we all know that no WMD were ever discovered, there is no suspense in that department.  Luckily, Greengrass keeps things moving fast enough action-wise that we don't think about that too often, and the moment-to-moment suspense of the situations Miller is put in (greatly aided by the excellent, propulsive score

by Bourne alum John Powell) are enough to keep us glued to our seats, absolutely breathless.

Green Zone is the best action movie since The Bourne Ultimatum and quite possibly the best spy movie since Casino Royale.  I don't begrudge Universal marketing it as "Bourne in Iraq;" honestly, that's fair.  There may not be a moment quite as jaw-dropping as the one in The Bourne Ultimatum where the camera follows Bourne's leap through an upper-story window in Tangier, but that's only because Green Zone exists in a slightly more grounded level of reality than Jason Bourne.  Overall, though, it delivers the same level of thrills.  If you enjoyed the Bourne movies, you'll enjoy this.  (And you will probably be saddened anew that Greengrass has apparently sworn off directing another Bourne, as he makes his mastery of this style so clear once more.)  I left the movie with the same feeling I have after I've just ridden a really great roller coaster: I wanna do it again!
Posted by Tanner at 1:29 PM

I have not seen "Green Zone" - aka "The Bourne Reconnaissance." As a conservative I will approach it with a mine sweeper. But you're right, Quatum's action scenes where painful. In fact, its style- rapid fire editing faster than eye and brain coordination- were so at odds with the overall pace of Foster's dialog scenes as to be jarring. This was the first Bond film that was more exciting when people were standing still.cr

Ha! Great assessment of Quantum of Solace: more exciting when people were standing still. I agree 100%.

That said, I suspect you'll discover that Green Zone is pretty inoffensive anyway. As I said, it's not really a political movie. When you do see it, please stop by again and let us know what you thought!

(And I wouldn't really recommend seeing it with earmuffs; the sound design and score contribute as much to the awesome action scenes as the direction and editing!)