It is with great sadness that I report that Jim Phelps has accepted his final mission.  According to The Associated Press, Mission: Impossible star Peter Graves passed away today in Los Angeles, just weeks shy of his 84th birthday.  Graves was a titan of the spy genre, and he will be greatly missed by fans the world over.  Mission: Impossible began airing on CBS in 1966, with Steven Hill playing team leader Dan Briggs.  But the series didn't fully gel until Graves replaced Hill the following year as new team leader Jim Phelps.  Graves's iconic performance in that role, in conjunction with Lalo Schiffrin's unmistakable theme music and the trademark opening in which Phelps receives his new mission each week via an exploding tape player, made Jim Phelps one of the most famous TV spies of all time.  In fact, thanks to those elements, I'd say that Mission: Impossible is probably the most famous today of all the American spy series to come out of the Sixties. 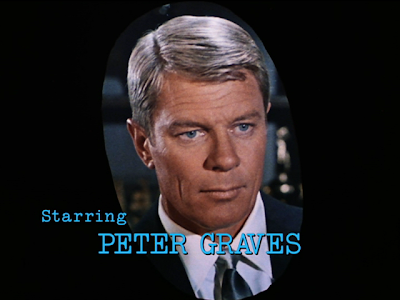 Graves was at once an undeniably commanding presence on the series.  His prematurely white hair and straight-arrow earnestness (and his ability to maintain his dignity as his wardrobe changed from blue suits to orange turtlenecks as the series entered the Seventies!) made him a natural team leader, and he clicked with audiences in a way that Hill never had a chance to.  All of the characters on Mission: Impossible were intentionally written as blank slates.  They were cryptic men and women who could become anyone as the mission of the week dictated, government agents and professionals in their fields of expertise who didn't generally bring any baggage to their jobs.  Later seasons attempted to flesh them out a bit, sprinkling a few more "personal" episodes throughout the year.  (My own favorite found Graves falling in love with doomed guest star Joan Collins.)  But in the early seasons of the show, it was up to the actors alone to bring a personality to their enigmatic characters.  Peter Graves has taken some slack over the years for his no-nonsense, straight-arrow, some might even say stiff performances (Graves himself described the parts he was famous for best as "straight-shooting, iron-rod-up-the-back kind of fellows"), but the fact is, that was exactly what the role demanded.  Steven Hill approached his role as someone who should just blend right into the background, which he saw as appropriate for a spy.  Well, yes, it was appropriate for a spy, but ultimately not for a TV spy.  He blended too much into the background. Peter Graves brought exactly the earnestness, exactly the straight-shooting, iron-rod-up-the-back qualities to the role of team leader necessary to read on television as a man who could command a team of specialists in life-or-death situations, a man who could mastermind the most complex operations imaginable.  Martin Landau and later Leonard Nimoy had the flashier roles as the masters of disguise who got to play a different part each week, but it was Graves who grounded the series.  And it was Graves who carried the series.  While there were many great supporting players on Mission: Impossible, and they all contributed to its overall success, Graves was the only constant over the years in both incarnations of the show.  (It was revived for two seasons in 1988-90.)  Once he appeared in Season 2, he was instantly irreplacable.

That didn't stop filmmakers from trying to replace him, however, in the first theatrical Mission: Impossible movie

, wherein Jon Voight played a traitorous character named Jim Phelps who's nothing like Peter Graves's dyed-in-the-wool patriot.  For many fans (myself included), this left a dark stain on the film series as a whole.  Late last year, however, J.J. Abrams, who is producing the next installment in the series, intimated that he hoped to rectify that disgrace by putting Graves into the next movie.  (As I've said many times, it would be so simple to undo the damage wrought by David Koepp and Brian De Palma with one simple line: "Too bad that guy who you gave my name to after I retired turned out to be such a jerk.  Oh well.")  Abrams' exact words were, "I got a call that Peter Graves is in great shape!" which makes the actor's passing even sadder.  I wish that he could have lived long enough to have seen his famous character vindicated on screen.  I think now more than ever Abrams and Cruise owe it to Graves to do right by his character.  Another possibility that Abrams mentioned was having Graves's M:I costar Leonard Nimoy appear in the next film, as he did in Abrams' recent Star Trek reboot

.  I now hope more than ever that that happens, and that Abrams uses Nimoy's character, Paris, to clear Jim's name.  Sure, it would require a bit of cleverness, but Abrams proved himself perfectly adept in Star Trek at harmonizing incongrous continuities!  Make it so, J.J.!  It would be a fitting tribute to the great Peter Graves. 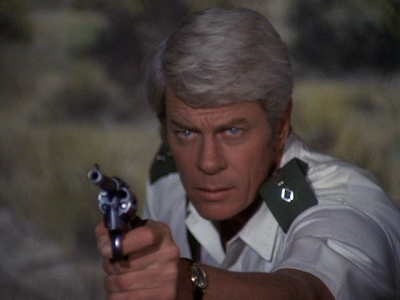 There was more to Graves's career, of course, than just Jim Phelps.  Early on, he earned wide acclaim for another spy role (one as far from TV's Jim Phelps as you could get), in Billy Wilder's WWII prison drama Stalag 17

.  He also made a number of B-movies in the Fifties, including the giant grasshopper invasion classic Beginning of the End

. From there he went on to star in a few TV Westerns, following in the footsteps of his older brother James Arness (Gunsmoke).  Graves played second fiddle to a horse in Fury

and then starred in Whiplash, the latter an Australian Western shot on the actual Outback and produced by Britain's ITV, a brand name well familiar to spy fans. (Whiplash was recently issued on DVD in England by Network.)  After the original Mission: Impossible series wrapped up, Graves gleefully sent up his "stiff" straight man image in two Airplane! films, proving that he had more range as an actor than any of his critics ever suspected.  He also sent up his Jim Phelps role pretty directly in the Hong Kong spy spoof Mad Mission III: Our Man From Bond Street.  Following the Mission: Impossible revival series, Graves continued to work right up until the end of his life.  Besides hosting and narrating A&E's Biography for many years, he had a recurring role as the Camden family patriarch on 7th Heaven and guest-starred on House and American Dad.  He was honored late last year with a star on the Hollywood Walk of Fame and a Lifetime Achievement Award at the Ojai Film Festival.  (He gave a great interview to the LA Times on the occasion.)

Unlike an IMF agent who fails in his mission, the Secretary (or anybody else, for that matter) will never disavow all knowledge of Peter Graves.  Though Jim Phelps's name (with Jon Voight's face) may have been unceremoniously slandered in the first Mission: Impossible movie, Graves's incarnation of Phelps–the true, definitive and only real version of the character–lives on, with all seven seasons

of the original series (six starring Graves) now available on DVD.  Graves's legacy also lives on in the countless characters inspired by Phelps, currently personified on TV by Timothy Hutton on the Mission: Impossible-inspired Leverage.  Peter Graves's lasting contribution to the spy genre will never be disavowed, and never be forgotten.  He was a true icon, in every sense.  And he was one of my own personal favorite spy stars.  I miss him already.

Re: your intro...I prefer to think he's chosen to accept his final mission.

Graves was certainly one of the coolest actors and greatest voices in the biz. When I was growing up, his "Jim Phelps" character was, along with Kirk, West, Brown and Bond, one of the heroes who made "Jim" the coolest name in action-adventure.

Plus, Mr Graves was one of those old-school screen heroes who seemed "grown up" even in his youngest roles, as opposed to today's crop, who come off as teenagers (albeit wrinkled ones) no matter how long they hang around. (And yes, Mr Cruise, I'm looking at you.) I miss that breed of "mature and in-control" figures. Gave us boys something to aspire to, you know.

A very nice tribute piece, but *please* change the picture at the top, because it's awful - and not in itself a fitting tribute.

David, I think you're right. I actually had that opening first, thought it was too corny, and changed it. But in retrospect, I agree it would be more fitting.

Simon, I'm sorry you don't like the picture. Personally, I love it! It's a blow-up of a detail from a UK comic book cover, and I always liked the weird colors and had been saving it for years to illustrate some Peter Graves story. I never thought it would be an obituary though. I will add some regular photos, though; I hope that satisfies you more!

Well said, Tanner. Phelps, along with other TV stalwarts William Shatner and Pernell Roberts personified the kind of hero I admired.

Lom (Kevin Hagen): "Do you intend to instigate a scandal?"

Phelps [in his best German accent]: "I intend to instigate a total mental collapse!"

Thanks, CK. They really don't make 'em like Graves anymore. I can't think of a single comparable leading man on today's TV landscape.

David, I took your suggestion and changed the opening. You're right; it is better. Thanks!

Actually, if the photo is actually artwork,(which I did wonder at actually) then it isn't bad - certainly a step up from artwork that usually pops up in UK annuals and comic books!

And you've added some other pics too.

David, I took your suggestion and changed the opening. You're right; it is better. Thanks!

If all those years of watching Hee Haw taught me anything, it's that corny rules!

Of course it also gave me an abiding fear of being smacked in the rump by a sentient fence board...

Wonderful tribute. Superior to anything I've read in any newspaper including Variety.