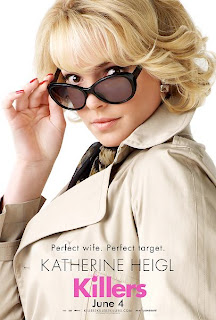 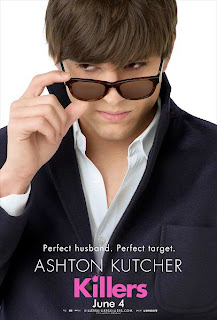 To be fair, though, this really isn't a bad campaign; it just pales next to Knight and Day's.  These Killers teaser posters do manage the difficult trick of conveying the oddball genre: part spy movie, part romantic comedy.  The classic cold war secret agent iconography of sunglasses and trenchcoat (doesn't Heigl look sort of Agent 99?)augments the popular current romcom imagery of glossy, retouched close-ups of the stars' faces.  Even the logo gets the message across: the dot on the "i" in Killers is a bloody bullet hole... but it's pink!  I kind of like that.  These posters remind me of the modern, photographic equivilant of the painted artwork for the Sixties Doris day spy romcoms, like Caprice

.  As I said before, I've read the script for Killers and it wasn't bad–even before talented hotshot Ocean's 11

screenwriter Ted Griffin did a rewrite.  And I'm always pleased to see Tom Selleck in a movie.  But I just can't really wrap my head around these particular stars in the parts as I read them... or as spy stars in general.  But let's give them the benefit of the doubt for now, shall we?
Posted by Tanner at 2:02 PM

Killers is currently in pick-ups or re-shoots right now. I've heard it on the extras hotline. They're looking for young, hot, upscale French people.