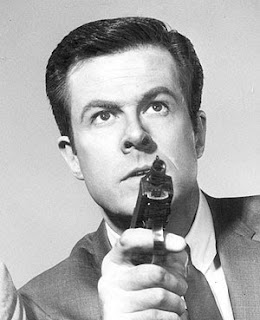 The world has lost another great Sixties spy hero today.  According to the Los Angeles Times, Robert Culp, who played secret agent Kelly Robinson on I Spy

from 1965-68, has died in Hollywood at the age of 79.  Robinson travelled the globe using the cover of a world-class tennis pro on the international circuit.  Bill Cosby played his partner, Alexander Scott, and posed as his trainer.  The series was groundbreaking for its portrayal of an African-American action hero on equal footing with his white co-star, and established the blueprint for all those black-and-white action pairings to come, like the Lethal Weapon series.  Social ramifications aside, though, it was also a plain old fun TV show, thanks to Culp and Cosby's undeniable chemistry and easy repartee.  Furthermore, it was the first American spy series to actually shoot on location around the world, and not just rely on recognizable spots around Los Angeles to stand in for far-flung exotic locales (like, say, Mission: Impossible!).  The location shooting makes a huge difference, and the lush Greek or East Asian scenery adds immensely to the spy plots and helps the series hold up well today.

Robert Culp not only starred on I Spy, but also wrote a number of episodes and even directed one.  On his audio commentary for the Season 1 DVDs

, Culp brazenly takes credit for much of the series' success–and it's a tribute to his totally self-assured charm that he (like Christopher Lee) can get away with such an egotistical sounding claim!  According to the actor, he realized that the scripts that were coming in were bad, so he took it upon himself to hole up and write a whole stack of his own scripts in the period between shooting the pilot and shooting the series.  Since he realized that the writers might resent that, he approached the producer with an idea (for a script he'd already completed) and the producer–likely just to humor his star, and probably not taking the offer seriously–told him to write it up.  Boy was he surprised when Culp came back the next day with not an outline, but a finished script!  Indeed, Culp's episodes are all among the series' best; he certainly had a great sense of his character's voice–and that of his co-star.  That kind of iniative and plain old chutzpa is characteristic of Culp and the maverick stars of his generation, the likes of which we're unlikely to ever see again.

Despite his bold assertions, Culp never took himself too seriously and happily sent up his famous role as early as 1968, when he made a cameo appearance in an episode of Get Smart called "Why Spy?," which expertly parodied the witty back-and-forth banter of I Spy.  That wasn't the last time Culp sent up his superspy image, either.  He played a crazed former agent turned terrorist on the short-lived, tongue-in-cheek 1997 Sam Raimi spy series Spy Game, played a character named "Scott Kelly" opposite his old co-star on The Cosby Show, and reprised his Kelly Robinson role for a dream sequence on an episode of Cosby's next series, Cosby, entitled "My Spy."  He also appeared on other spy shows including A Man Called Sloan (with Robert Conrad) and, in what's probably my favorite Culp performance, in The Man From U.N.C.L.E. episode "The Shark Affair."  Culp played the Captain Nemo-ish villain in "The Shark Affair," and imbued him with such dignity and such a sense of righteousness that I even found myself siding with him against Napoleon Solo!

Culp legitimately reprised the Kelly Robinson role in a 1994 TV reunion movie called I Spy Returns, which served as a possible pilot for a new series (which never happend) focusing on the next generation of Robinsons and Scotts.  The reunion focused more heavily on comedy, whereas the original series was serious–sometimes quite serious, to the point of being downbeat–and relied strictly on the banter between Culp and Cosby and the actors' own personalities to generate its substantial but incidental humor.

and big-screen turns in films like Hannie Caulder (with Raquel Welch), Bob & Carol & Ted & Alice, Sky Riders (with James Coburn), Inside Out, and Hickey & Boggs.  He directed the latter, a 1972 private eye movie which reteamed him with Bill Cosby.  Hickey & Boggs is grimmer than even the grimmest episodes of I Spy, minus much of the humor that came from the characters' interplay on the series.  Audiences at the time may have been expecting lighter fare from the I Spy stars, and the movie has been unfairly relegated to obscurity.  (It isn't on DVD in the United States.)  However, it's quite a remarkable film and a testament to Culp's sadly underused directing prowess.

Culp continued to work up until the end of his life.  He recently wrapped a film called The Assignment (possibly a spy movie?) and made regular public appearances at conventions and screenings.  I'm just kind of dumbstruck losing him so soon after Mission: Impossible's Peter Graves.  They just don't make heroes anymore like they did in the Sixties, and Robert Culp will always be remembered as one of the greats.
Posted by Tanner at 4:33 PM

I was devastated upon learning the news. Culp, Pernell Roberts, and of course, Peter Graves--all gone. All were heroes to me as a youngster and in reading about their offscreen lives, allowed me to admire them as people, too.

I'd been watching Culp's COLUMBO episodes this past week, so the man's great talent had been in my thoughts.