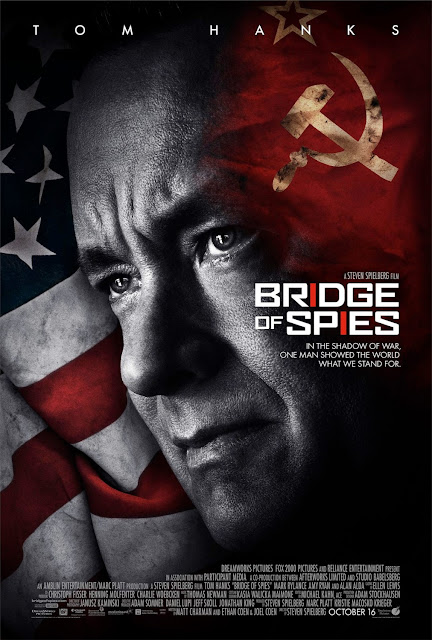 Dreamworks has released the first poster for Steven Spielberg's Cold War spy movie, Bridge of Spies. Tom Hanks (The Man With One Red Shoe) plays CIA lawyer James Donovan, who goes behind the Iron Curtain to negotiate the release of captured U-2 pilot Francis Gary Powers, whose spy plane was shot down in 1960 over Russia. Donovan's efforts led to a famous spy swap in 1962 on the titular bridge, which served that function on multiple occasions owing to its strategic location spanning from West Berlin to Potsdam in East Germany.Matt Charman (Black Work) and the Coen Brothers (Burn After Reading) penned the script, and Alan Alda (The Blacklist), Amy Ryan (Green Zone), Mark Rylance (The Gunman) and Sebastian Koch (The Lives of Others) co-star. One name it's very strange not to see on a poster for a Spielberg movie is John Williams. For only the second time since their epic collaboration began over 40 years ago, Williams (no doubt busy with the new Star Wars) will sit this picture out despite previous reports to the contrary. Too bad. I was looking forward to hearing his take on a Cold War spy sound. Instead, Thomas Newman (Skyfall) will score.

Bridge of Spies opens October 16. Stay tuned for the first trailer, due to hit later today.
Posted by Tanner at 1:59 AM