Second Trailer Drops for The Man From U.N.C.L.E.! 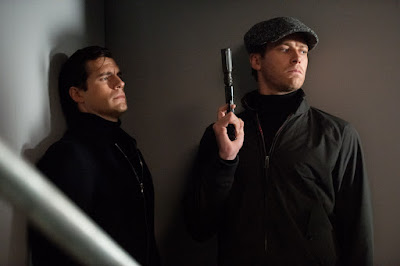 The Man From U.N.C.L.E. with some prints of San Andreas a few weeks ago, but it never made it online. Today they've finally made a new trailer available online. (Whether it's the same as the one that played in theaters, or a version of it, is still a bit unclear. ) Like the first one, the new one makes Guy Ritchie's film look absolutely fantastic! The bit with Illya Kuryakin (Armie Hammer) ziplining across the Berlin Wall (in pursuit of Napoleon Solo [Henry Cavill] and his female companion [Ex Machina scene stealer Alicia Vikander], as we know from that EW story last month), just hits all of my Cold War spy fandom buttons! I love the 1960s setting, and I cannot wait to see this film! Check it out:

I also note a clear homage to Casino Royale with the toilet flight.