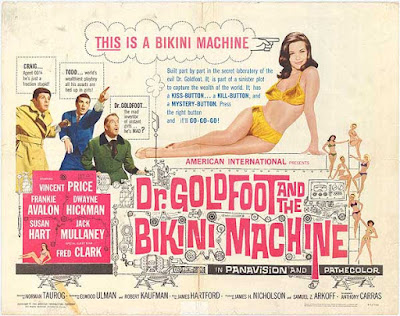 Kino Lorber Studio Classics has announced on their Facebook page that they will be releasing both of the Vincent Price Dr. Goldfoot spy spoofs on Blu-ray this fall! Dr. Goldfoot and the Bikini Machine, co-starring Frankie Avalon, and its sequel Dr. Goldfoot and the Girl Bombs, co-starring Fabian and the Italian comedy duo Franco & Ciccio, and directed by the great Mario Bava (Danger: Diabolik) will each be available separately, and only on Blu-ray. (That's okay. The pair are already available together on a budget DVD double feature.) I cannot believe how far we've come! For years the first movie was available on DVD, as part of MGM's late, lamented "Midnite Movies" line. Girl Bombs was only available on VHS for years, until that double feature disc finally popped up with zero fanfare (and initially as a Walmart exclusive) in 2012. We were lucky to have it. And now, they'll both be out on Blu-ray? And on a label with "classic" in its name, no less? I can hardly believe it!

As ecstatic as I am to know these camp classics are headed to high-def, I am also greedy. I want these releases to be all they can be... and I know all they can be! I am the sort of crazy Dr. Goldfoot fan (I say "the sort," but for all I know I may be the only one) to have re-planted my DVDs into a custom-made "ultimate Dr. Goldfoot box set." This set includes both Dr. Goldfoot movies, the Italian version of Girl Bombs, Le Spie Vengono dal Semifreddo (available as a Region 2 import), the DVD Vincent Price: The Sinister Image, which includes the TV special Shindig! The Weird Wild World of Dr. Goldfoot, and a bootleg of the Franco & Ciccio Eurospy movie Due Mafiosi Contro Goldginger. The Shindig! special was made up of musical numbers excised from the first film when the studio decided it shouldn't be a musical. The presence of the Franco & Ciccio movie requires further explanation. 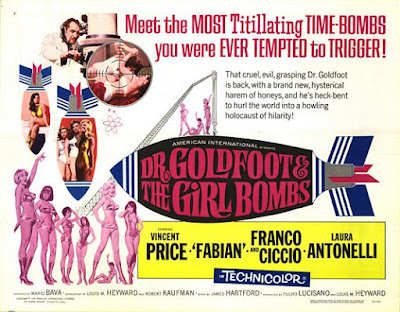 Bava's Dr. Goldfoot and the Girl Bombs actually serves as a sequel to two completely different, unrelated movies: Dr. Goldfoot and the Bikini Machine, and Due Mafiosi Contro Goldginger. The former was a hit in America; the latter was a hit in Italy; the studio thinking was that both audiences could be pleased with one movie. But this resulted in two significantly different cuts of the film for the two countries. The Italian version features a lot more of Franco & Ciccio, for one thing. (Though huge in Italy, they are at best an acquired taste for most American audiences, who tend to find that a little goes a long way.) The American version features more of American teen idol Fabian (The Million Eyes of Sumuru). While neither cut is, um... good, exactly, both have their pluses and minuses. Therefore, for a complete appreciation of the Dr. Goldfoot oeuvre, on must watch both versions.

Now I feel my fake Dr. Goldfoot box set has the possibility of actually becoming, somewhat, a reality! I've got my fingers crossed that Kino clears the necessary rights to include The Weird Wild World of Dr. Goldfoot as a bonus feature on their Bikini Machine Blu-ray. And that they include both the U.S. and Italian cuts of Girl Bombs on that Blu-ray. It's not unheard of. They recently released a Blu-ray of Bava's early giallo masterpiece The Girl Who Knew Too Much and included both that Italian version and AIP's American cut, Evil Eye. So it's possible! And for icing on the cake, they need to include a commentary by Bava biographer Tim Lucas, who has recorded many fantastic commentary tracks in the past for other Bava movies, included on past Kino releases. Though this movie is probably Bava's worst, Lucas's chapter on it in his book Mario Bava: All the Colors of the Dark is one of the book's most fascinating and informative. I would love to listen to a Lucas audio commentary on Dr. Goldfoot and the Girl Bombs! I don't actually imagine they would be able to include Due Mafiosi Contro Goldginger as a bonus, but at least a trailer would be nice to give us a taste of it. Come on, Kino Lorber, please make these momentous releases all that they can be!
Posted by Tanner at 6:33 AM