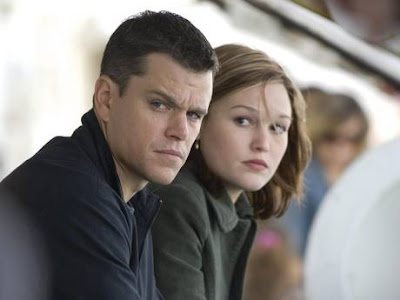 The next Bourne movie, featuring the long awaited return of Matt Damon to the role of Jason Bourne, Paul Greengrass to the director's chair, and Jason Bourne himself (absent from The Bourne Legacy) to the series whose titles bear his name, is finally casting up. Deadline confirms that Julia Stiles will reprise her role from the first three movies as CIA agent Nicky Parsons. I've often suggested that Nicky would make a good stand-in for Marie (regrettably killed off in the movies) should the filmmakers ever decide to actually adapt Robert Ludlum's terrific novel The Bourne Supremacy, of which they only used the title for the second movie, not the plot. She is, as far as we know, the only other woman that the Bourne of the films cares about enough that her kidnapping might stir him to action. But that's just my own fantasizing; the trade provides no details on what Damon, Greengrass and co-writer Christopher Rouse (Greengrass's frequent editor) have in store for her character. Last month we heard that The Man From U.N.C.L.E.'s Alicia Vikander is also up for a role, but that hasn't yet been confirmed.

Additionally, The Wrap's Jeff Sneider tweeted last week that Viggo Mortensen (Eastern Promises) has been offered a "bad guy role" in the film. Should he accept, that would be pretty damn cool! The Bourne movies haven't really had traditional "villains" (Clive Owen, Karl Urban and Edgar Ramirez, respectively, played antagonists with almost no lines in the first three films), but CIA officials tracking Bourne (played by the likes of Chris Cooper, Joan Allen, Brian Cox and Edward Norton) could also qualify as "bad guys" in these films. It will be interesting to see what kind of role they have in store for Mortensen. I'd love to see Bourne go up against a more clearly defined enemy. (Again, Ludlum's Bourne Supremacy provides such a character. As do his other two Bourne novels in the form of Carlos the Jackal. It would be very cool to see Mortensen play some sort of Carlos analogue, and to see the films explore that fascinating side of the Bourne story!) When David Cronenberg was attached to direct Ludlum's The Matarese Circle for MGM way back when (how freaking great would that have been?), I had hoped that he would cast his frequent collaborator Mortensen as the Russian agent opposite Denzel Washington's American spy. Instead, Tom Cruise became attached in that part. But I'd still love to see Mortensen end up in some sort of Ludlum role, so I hope he accepts. The still untitled next Bourne movie, Damon's first in nine years, is slated to open July 29, 2016.
Posted by Tanner at 4:00 AM