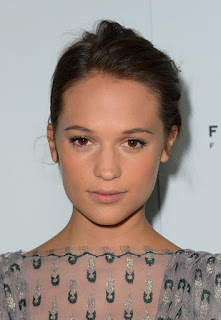 Matt Damon's fourth Bourne movie (fifth in the series overall) is picking up steam! Hot on the heels of the news that Julia Stiles would reprise her role of Nicky from the first three movies comes confirmation, from Deadline, that red-hot Swedish star Alicia Vikander has, indeed, signed onto the project. We first heard rumblings that the breakout star of the sleeper hit Ex Machina (whose previous spy credits include The Fifth Estate and the forthcoming The Man From U.N.C.L.E.) was up for a Bourne role a month ago, out of Cannes. Coming off of a standout performance like she gave in Ex Machina (likely to earn her an Oscar nomination), the actress had her pick of projects, and ended up selecting The Bourne Resurrection (or whatever it really ends up being called) over the likes of Assassin's Creed with Michael Fassbender or The Circle with Tom Hanks.

Paul Greengrass, who helmed The Bourne Supremacy and The Bourne Ultimatum as well as the underrated Green Zone with Damon, will direct the new Bourne movie and is writing the script with Christopher Rouse (who edited Greengrass's two previous Bourne movies) after concocting the story with Damon. Damon and Greengrass are also producing, alongside franchise newcomer Gregory Goodman (X-Men: First Class) and Bourne veterans Frank Marshall and Jeffrey Weiner, of Captivate Entertainment, rights-holders of the Robert Ludlum library. Universal has announced a July 29, 2016 release date, but it will be interesting to see if they can actually make that date with just over a year to go and casting only beginning to firm up now. As previously reported, Viggo Mortensen is also rumored to be considering a role in the film.