The Man From U.N.C.L.E.'s Mr. Waverly Character Poster Has Arrived 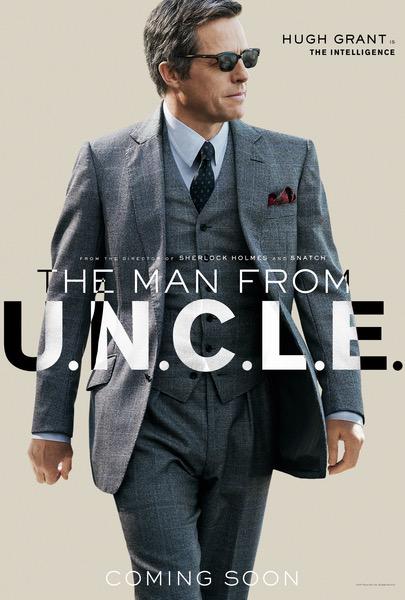 And, today, we've at last got what's probably the final character poster for Guy Ritchie's The Man From U.N.C.L.E.: Hugh Grant as Alexander Waverly, here billed as "the Intelligence." U.N.C.L.E. boss Mr. Waverly was played on the Sixties TV series by Leo G. Carroll (North By Northwest). When the casting of Grant as Waverly was first announced, it struck me as such inspired casting that that was the moment I sat up and took interest, thinking, "Wow, this U.N.C.L.E. movie just might be something special!" And the two trailers we've seen so far (here and here) have only strengthened these feelings. I think this movie will be great.

Thanks to David Diabolik for the tip!
Posted by Tanner at 2:49 PM

I am so excited to see this movie as a life long U.N.C.L.E. fan.

PS:
Surprised no tip of the bowler to the late Patrick Macnee AKA John Steed on your site.

My first reaction to the casting of Hugh Grant was predictable.

But the bits shown on the trailers have reassured me a little. And remember that an actor can always surprise us. Who thought in 1962 that Jack "Light Comedy" Lemmon could convincingly portray an alcoholic?

There will definitely be a Patrick Macnee remembrance. A friend of mine was getting married last week and I didn't have time to devote to a proper sendoff of one of my very favorite actors of all time, from my favorite TV show ever. I need to do the great John Steed proper justice!