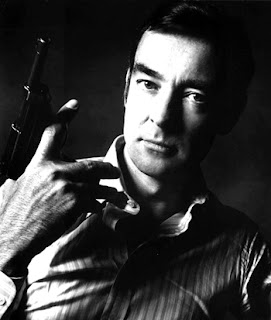 Richard Johnson has passed away at age 87, according to the BBC and other sources. A RADA-trained founder member of the Royal Shakespeare Company, Johnson starred in a number of spy movies and was reportedly considered for the part of James Bond. Most importantly, however, he starred in the greatest Bond knock-off ever made, 1967's Deadlier Than the Male. (Read my review here.) While Elke Sommer and Sylva Koscina stole the show as the titular femme fatales, Johnson more than held his own as hero Bulldog Drummond. Sapper's famous character was re-imagined for the 007 age, and Johnson (who actually began his film career in 1951 with a bit part in Calling Bulldog Drummond, starring Walter Pidgeon) played him suavely and with great charm. Charm was never a given with leading men in Eurospy movies, and it was Johnson's easy appeal that put him ahead of all the other wannabe Bonds of the Eurospy scene. He reprised the role two years later in a more comedic sequel, Some Girls Do. Other notable spy-related roles for Johnson included an appearance on one of ITC's early adventure shows, The Four Just Men, the all-star WWII espionage thriller Operation Crossbow (opposite Tom Courtenay, George Peppard, Anthony Quayle and Sophia Loren), a tough-as-nails performance as super-agent Jonas Wilde in Amicus's sole foray into Sixties spydom, Danger Route (another fantastic Eurospy movie that really, really needs to be on DVD!) A Twist of Sand (opposite Honor Blackman), the hard-hitting IRA thriller Hennessy, an episode of the Quiller TV show, playing Richard Sorge on an episode of BBC's fact-based series Spy!, as a Brigadier on a couple of spy-themed episodes of Magnum, P.I., an episode of Mr. Palfrey of Westminster, Spymaker: The Secret Life of Ian Fleming, and a recurring role on the seventh season of Spooks (MI-5). His more famous non-spy credits include The Haunting (1963), Khartoum (opposite Charlton Heston), Lucio Fulci's seminal 1979 gore-fest Zombie, Dr. Watson to Heston's Holmes in Crucifer of Blood, and Anglo-Saxon Attitudes and Lara Croft: Tomb Raider (both co-starring Daniel Craig). Never as well known as he deserved to be, Richard Johnson was a titan of the spy genre and will always be remembered in circles where Deadlier Than the Male and Danger Route (which Quentin Tarantino slotted in a personally curated cable programming block a decade ago) are recognized as the absolute classics they are. Rest in peace, Bulldog Drummond.

In what turns out to be a fitting tribute, Deadlier Than the Male will be released on Blu-ray in the UK this week by Network.
Posted by Tanner at 1:57 AM

Deadlier Than the Male is terrific fun. Very sad to hear of Johnson's passing, although 87 is a pretty good innings.

Yes, at 87 he certainly had a good run! (I only wish Network had gotten him to do a commentary for their new DTM Blu-ray while there was still time. Alas.)

Without a doubt he'd have made a good Bond when he was younger.