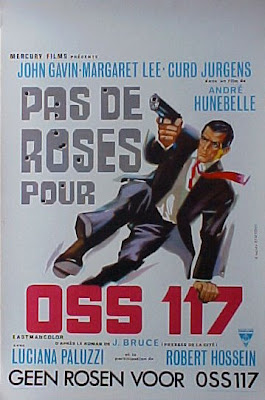 In eager anticipation of the new OSS 117 parody movie, OSS 117: Lost In Rio, I decided to take a look at one of the original OSS 117 movies: the second-to-last of the Sixties cycle, OSS 117: Murder For Sale, starring John Gavin. I’d seen this movie before, but only in French–on the Region 2 DVD box set, which offers up fantastic transfers, great bonus features and a terrific, lavishly-illustrated booklet on the history of the series–but, most regrettably, no English subtitles or language tracks. Chunks of Murder For Sale are still in English in that version, but the majority is in French. And my high school French can only get me so far in a movie. (The bonus features are another story, though; prior OSS 117 star Kerwin Matthews’ French is about as good as mine, so I could understand his slowly spoken, American accented words just fine!) It makes a big difference seeing a film in a language you can understand. From my French viewings of the series, Murder For Sale was not one of my favorites, but seeing it this time I really enjoyed it. 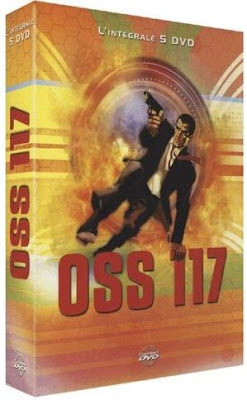 For readers only familiar with the modern OSS 117 revival series, the most important thing to know about the original films is that they are not parodies. They’re straightforward, very Bondian Eurospy films, based on a series of equally straightforward, pulpy novels by Jean Bruce. Bruce’s spy novels predate even Ian Fleming’s, but I don’t think they were widely published in English, if at all. While there was one OSS 117 movie attempted in the late Fifties, the proper series kicked off in the immediate wake of the cinematic 007, like all Eurospy series. 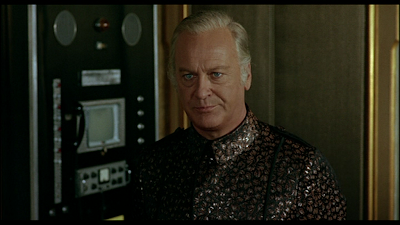 That they are not parodies, however, doesn’t mean that the Sixties flicks are without humor; as in the Bond films, there is plenty of it on display in OSS 117: Murder For Sale, a lot of which didn’t come through for me previously with the language barrier. Villain Curd Jurgens is a particular joy, and gets all the best lines. This might come as a surprise to Bond fans who know him only as one of the drier Bond villains, Karl Stromberg in The Spy Who Loved Me. Stromberg is the formulaic Old White Guy Blofeld clone, with the usual ambitions of world domination. Jurgens has much more fun with his OSS role, identified only as "The Major." Clad in every scene in a shiny, weirdly textured, patterned Nehru jacket (what else?), Jurgens plays the Major rather effeminately. Not enough so to detract from his villainy, but enough to make him a more interesting character. His organization (dubbed, quite unoriginally, "The Organization") employs code names inspired by Disney characters: Mickey Mouse, Donald Duck, Goofy, etc. The Major, of course, is Snow White. He also gets the best lines. After his hulking, oafish henchman makes a critical mistake, the Major wrings his hands and moans, "Oh... Oh, my dear God, when will my prayer for one single intelligent henchman be answered?" 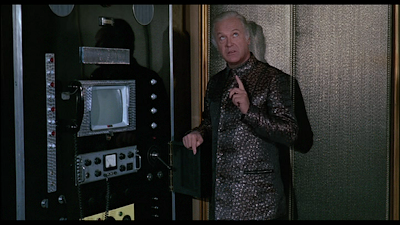 "I haven’t been beaten by [OSS 117]," he chides the brute, "but by your thick skull! And your floundering stupidity!" Compared to Karl Stromberg, this animated performance is a revelation! 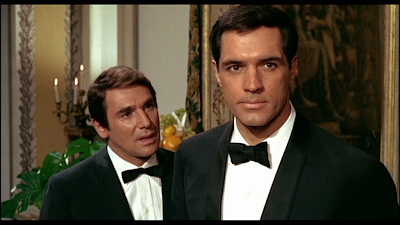 Representing the forces of good, we have John Gavin playing Secret Agent 117 this time out. (And it’s easier just to stick with the nomenclature, since he has so many identities in this movie. Hubert Bonisseur de la Bath is going by the name Jonathan Roberts, playing the undercover role of a killer named Chandler who in turn is given the alias James Mulligan. Whew!) Gavin, probably best known either for playing the boyfriend, Sam Loomis, in Psycho or for being the first U.S. Ambassador to Mexico under Ronald Reagan, has his own Bond history as well. He was signed, paid and all set to play 007 in Diamonds Are Forever, following George Lazenby. Then, at the last minute, Sean Connery was lured back with a then-unheard-of million dollar offer, and Gavin never got his chance.

Here, he ably demonstrates that he could have made a very credible Bond... if only he weren’t American. The accent never would have worked, but he does have very Connery-like expressions and mannerisms, not to mention good looks. Most importantly, he’s charming and likable, difficult skills for Eurospy heroes, who often come off as charmless and loathsome. 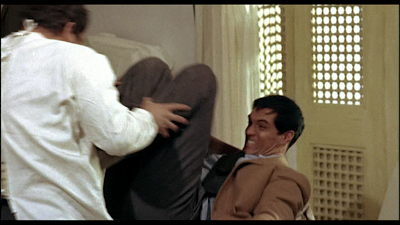 Gavin also appears to do his own fights, and he’s got some pretty good moves. There are a lot of fight scenes, and they’re actually all good (even if they’re occasionally marred by sped-up photography), which is never a certainty in Eurospy fare! Highlights include a climactic rooftop scuffle with the aforementioned hulking henchman, and a scene in which Gavin is rudely gotten out of bed (one he’d been sharing with the beautiful, naked Rosalba Neri) and forced to fight several police officers in the nude! Eventually they get him at gunpoint, though, leaving him covering his privates with a newspaper. Unfortunately, that’s when they shout, "Hands up!" 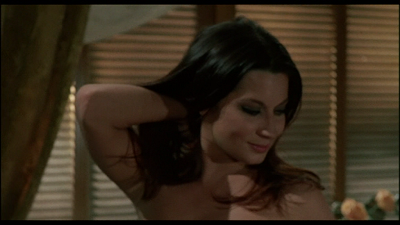 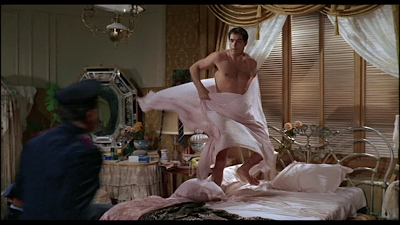 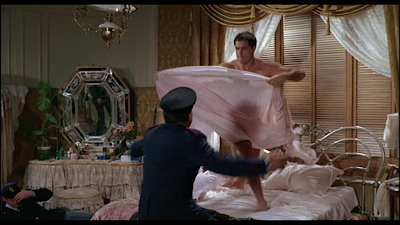 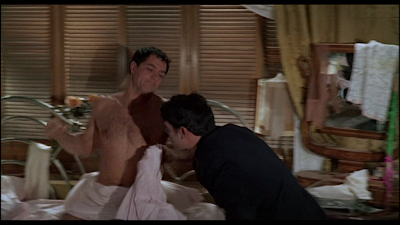 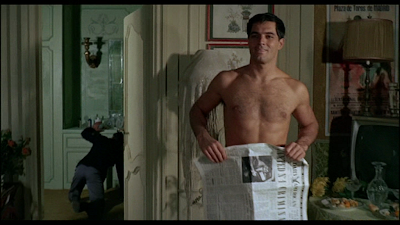 117 is arrested because he’s posing as a guy named Chandler, France’s Public Enemy Number One. He’s even, according to his American bosses (who do, indeed, have a curtain in their office, living up to Eurospy tradition), had plastic surgery to look like Chandler! (Which also, conveniently, explains why he’s played by a different actor than he was in the last movie–and also proves what a bad idea that ploy would have been had the Bond producers used it in On Her Majesty’s Secret Service, which had been considered!) The plan is that "Chandler" will be recruited, as most top killers are, by The Organization to conduct political assassinations. Sure enough, The Organization bites, springing him from custody by dangling a wacky sleeping gas canister (one that looks an awful lot like the roulette wheel laughing gas dispenser in Casino Royale) over the motorcade that’s transporting him. Then he’s whisked off to meet The Major in his plush villa. There, he also meets The Organization’s doctor, played by Thunderball’s gorgeous Luciana Paluzzi. She tests him, but he in turn seduces her. She falls for him so hard, in fact, that she’s reluctant to inject him with the "general vaccination" that The Major orders... due to the fact that she knows it’s really a deadly poison. 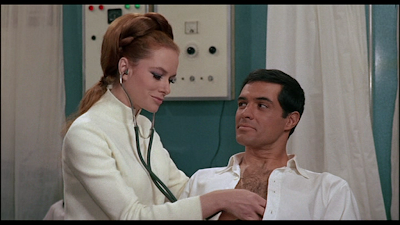 The Major instructs 117 to meet up with another doctor in the Middle East, where he’s to carry out his assignment and assassinate a UN watchdog. "As lovely as your house physician?" inquires Gavin.
"A matter of taste," says the Major. "It’s a man." To which OSS 117 rolls his eyes. 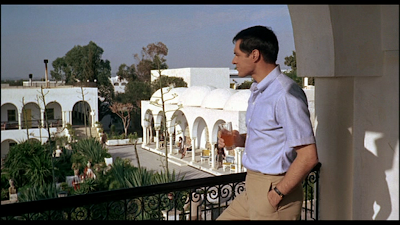 The male doctor tries to put an end to such eye-rolling with the admonishment, "Let me warn you: I have no sense of humor." He proves the point by revealing that the new agent is on a short leash. The Organization doesn’t trust him, so 117 will have to report to him each day at 5PM to be injected with the antidote to the poison–or he’ll die. It’s a good gimmick that leads to a tense fight later on (with a male nurse so enormous that you know as soon as he’s introduced that our hero will have to fight him) as the seconds count down to certain death. 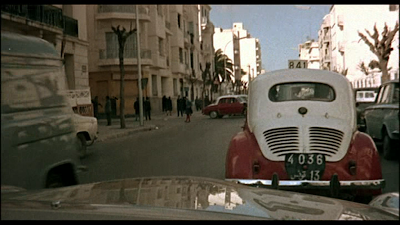 The movie contains some interesting similarities to On Her Majesty’s Secret Service–particularly interesting since this predates the Bond movie by a year. In one scene, OSS 117 escapes his doorknobless guest room by using a metal letter opener to go out sneaking. In another, he finds himself clamoring around an elevator shaft remarkably like the cable car room in OHMSS. And in another, he parks his car at the edge of a beach for a day-for-night fight and ends up carrying a beautiful woman in his arms! Almost certainly coincidences, but eerily similar enough to be worth noting nonetheless. 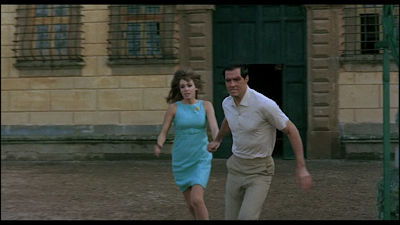 The OSS 117 films tend to feel a bit higher budget than many other Eurospy movies (curtain walls notwithstanding), and the flawless transfer offered on the Gaumont DVDs really accentuates the beautiful scenery and gorgeous photography, making this one appear even moreso. Beyond that, there’s a great, catchy score (by Piero Piccioni), glamorous Sixties fashions, sexy girls (led by the lovely Eurospy stalwart Margaret Lee), and an awesome sports car (something called an Iso Grifo GL350). 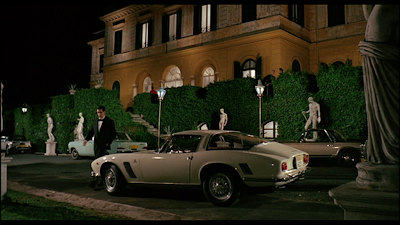 Add to all this a charismatic, capable hero and a properly scenery-chewing villain, and you’ve got yourself a very entertaining movie. It’s not without its drawbacks, though. Things slow down a bit in the second half with lots of skulking around in a Bedouin encampment involving two comic sidekicks and a donkey; Luciana Paluzzi inexplicably disappears all too soon, and the villain meets a disappointingly anticlimactic end. But overall, the good far outweighs the bad. OSS 117: Murder For Sale is high grade Eurospy. 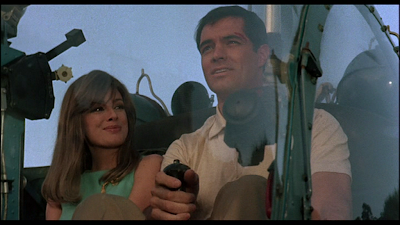 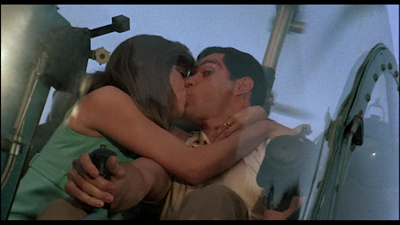 I've always wanted to see this film to get a feeling of what might have been vis a vis Gavin as Bond. I recently was able to thanks to a very cool friend.

I belive Gavin was signed to play 007 before Connery returned for Diamonds are Forever. In face the producers had to pay him off because he had already been signed.